The initiative that Toronto police credit with bringing down crime in troubled neighbourhoods appears to be yielding mixed results in one of those communities and has some residents complaining that trust in police may be eroding. 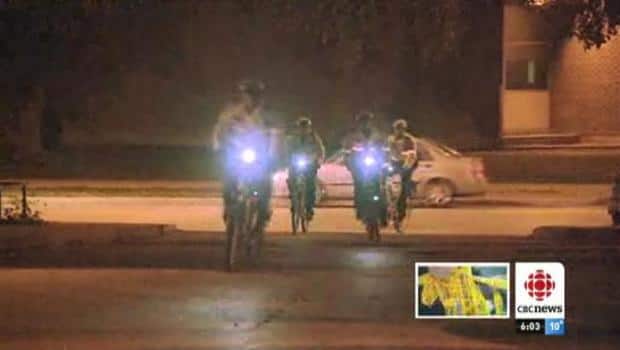 The initiative that Toronto police credit with bringing down crime in troubled neighbourhoods appears to be yielding mixed results in one of those communities and has some residents complaining that trust in police may be eroding.

Each summer, 64 specially trained officers deploy in two or three priority neighbourhoods as part of the Toronto Anti-Violence Intervention Strategy (TAVIS), which uses community engagement, increased foot patrol and enforcement as part of a strategy to fight crime.

One of the neighbourhoods that TAVIS officers were in this summer was in Jamestown in northwest Toronto.

Joan Stewart, who lives near Jamestown, said she does not normally let her kids play outside.

But one sunny afternoon in mid-September, TAVIS police officers were out in full force helping her kids and others build picnic tables.

And that’s exactly the type of response that police are hoping to hear.

"This is all about community mobilization. Getting the community involved in positive things; building positive relationships," says Supt. Ron Taverner.

But as the sun sets on Jamestown, TAVIS officers adopt very different tactics.

Police patrol the neighbourhoods in large numbers stopping and questioning nearly everyone they see.

CBC News accompanied police on one of their patrols on Sept. 21, and observed police questioning two teens for nearly 10 minutes.

One of the teens appeared shaken when approached by CBC News right after being questioned. When asked about what he thought of the increased police presence in Jamestown, he said "it is what it is."

Police say they stop and question anyone they suspect of trespassing. And the tactic works, they say.

"We're here constantly. And the opportunities for criminal activity is reduced by our presence," said Sgt. Collin Stewart of the TAVIS unit, which just this summer received a commitment from the province of $5 million in sustained funding each year.

Some crime down, then up

But it's not entirely clear how much of a lasting impact the police tactics are. TAVIS was also in the Jamestown area in 2010, and there were significant improvements in some crime numbers, which were then erased when those officers left the area.

In 2010, sexual assaults, robberies, and drug charges filed were all down significantly in the Mount Olive-Silverstone-Jamestown neighbourhood compared to 2009.

But there was a significant bounce for all three crime indicators in 2011, when TAVIS officers had left the neighbourhood: drug charges filed were up to 90 from 44, robberies were up to 78 from 54 and sexual assaults were up to 75 from 44.

Shootings down this year

There has appeared to be an improvement in shootings in the area this year since TAVIS officers took to the streets of Jamestown.

Between Jan. 1 and May 31 this year, there were 12 shooting occurrences in the areas around Jamestown where TAVIS police started patrolling in the summer.

TAVIS officers were deployed to the area in mid-May. Since then, there have been just four shooting occurrences in the area.

But statistics from previous years appear to suggest a post-TAVIS bounce in shootings in Jamestown and 23 Division, the larger area where the neighbourhood is located.

Based on maps shown in the police service's annual reports, in 2009, there were about 22 shootings in 23 Division. That number went down to about 17 in the next year, when TAVIS officers were patrolling the Albion-Finch area in Jamestown that summer.

"To be honest, when [police are] around, it's better because the guys aren't going to come around or whatever. It's better when they patrol," said one Jamestown resident who asked only to be identified by her first name, Melissa.

"When they leave, it doesn't make a difference. During the day, it makes a difference. Night time, it is what it is. These guys are going to do what they do regardless of the police. That's the way I see it."

Ali Abdullahi, a 29-year-old youth worker in Jamestown, says police may be building bridges during the day, but they are burning them at night.

Police on patrol say their priority is enforcement.

"We're the police at end of the day. Obviously we're not going to turn a blind eye," said Stewart.

"I guess it's a fine line. You use judgment, discretion, but at the end of the day there's a criminal element that we can't ignore."

But police admit they need the community's trust to do their job.

Last month, two men were shot execution-style in the middle of the neighbourhood.

There have been no arrests and no reported witnesses. It seems no one saw anything.