Several dozen police officers are combing through a wooded area in Ontario's Springwater Township, as they follow up a tip in the high-profile, nearly three-decades-old disappearance of Nicole Morin. 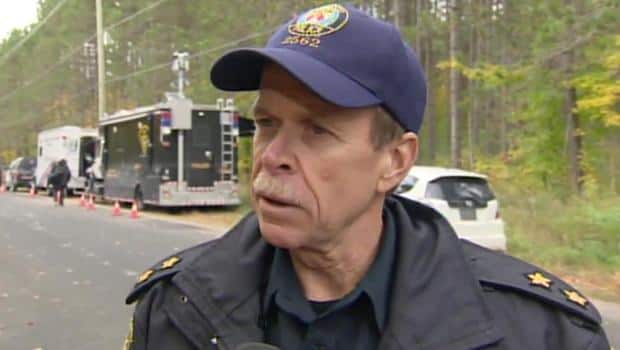 Several dozen police officers are combing through a wooded area in Ontario's Springwater Township, as they follow up a tip in the high-profile, nearly three-decade-old disappearance of schoolgirl Nicole Morin.

The search is taking place in a wooded area near Horseshoe Valley Road and Old Second South Road, about 20 kilometres north of Barrie, Ont.

Cashman said the tip police are acting on was information originally reported to the OPP nearly 30 years ago.

Police investigated at the time, but did not find anything. The Toronto police are taking another look out of due diligence, Cashman said.

Calling it "a long shot," Cashman said it is something that must be checked out.

The tip made its way to Toronto police following a renewed appeal over the summer for information about Nicole's disappearance.

Cashman said police may be at the scene through the end of Wednesday, or possibly into Thursday.

Police believe Nicole was abducted. But they've never had proof.

"For the family, for Nicole, she's still a missing person to us. She could still be somewhere out in the world at this point, not wanting to be found," Cashman said.

"We don't know that, but if she has met with foul play, it’s just it's our duty to come out here and stand up for her... and find the persons responsible, if that's the case."

On the morning Nicole went missing in 1985, she had walked out of her Toronto apartment, intending to ride the elevator down to her building's lobby, where she was to meet a friend.

But she disappeared and was never seen again.

Over the years, police have continued to receive tips, but never made an arrest.

With files from The Canadian Press and the CBC's Sue Sgambati