An Ontario couple is going public about how a mutual fund salesman "gambled" with their money - and lost $80,000 – by copying their signatures to buy high risk investments, against their explicit wishes. 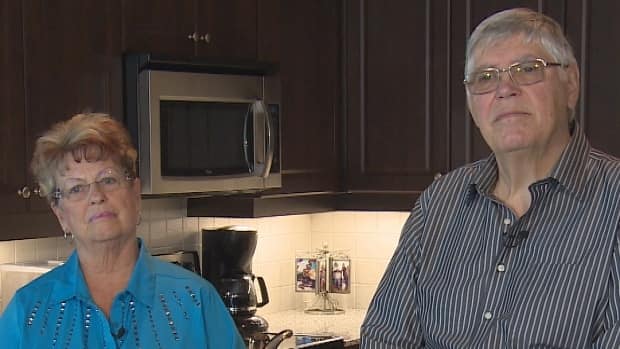 An Ontario couple is going public about how a mutual fund salesman “gambled” with their money — and lost $80,000 — by copying their signatures to buy high-risk investments, against their explicit wishes.

“We had asked for short-term, low-risk investments,” said her husband Don. “We were both very upset when we found out how much we had lost.”

The retirees from Parry Sound are equally upset that Equity Associates Inc., the Markham firm salesman Mervyn Fried sold through, refused to compensate them for their losses, even after the Ombudsman for Banking Services and Investments found the company responsible.

“The ombudsman's recommendations have no teeth to make them work,” said Don. “It’s been horrible.”

His wife has since developed a heart condition, which she blames on the stress.

“I never had any health problems prior to this,” said Elaine. “I am now on two heart meds, five times a day. I am furious. And every time this comes up, it starts all over again.”

As a result of this case, Fried’s licence to buy and sell mutual funds is now inactive.

However, he still runs his own company, MJF Financial Consultants, an investment services firm in Concord. His son Hayden is vice-president and is licensed to handle mutual fund purchases.

Six years ago, the couple gave Mervyn Fried $268,000 from the sale of their house to invest just for a few months, because they needed it to pay for a new home.

“We had trusted him to make the right choices for us,” said Don.

He had them write an additional cheque up front — payable to him personally — for $2,680, which represented his one per cent commission.

The couple didn’t know it is against the rules for salespeople to pocket fees from clients like that. Equity Associates later refunded them that amount.

The ombudsman’s investigation found Fried used liquid paper to erase information on old forms the couple had signed for RRSP investments. He copied those to make blank forms with photocopied signatures and used them to buy the high-risk funds.

“When I [later] saw the papers I said, ‘That is not my signature!’” said Elaine.

At the time, Fried already had his commission. He stood to earn another one per cent from the mutual fund companies on the principal plus any gains.

“I have the feeling that he was trying to earn us a little bit more. Get brownie points for that. He’s a hero,” Don said,

Fried invested in the funds when stock markets had dropped, in the summer of 2008. When the bigger crash came that fall, the couple lost 30 per cent of their money for good.

The ombudsman found Fried was “evasive” about the losses and tried to get the couple to leave their money in longer. They had to scramble and borrow to pay for the new home they had already purchased.

“It hurt. It put us in debt for the first time in quite awhile,” said Don. “The dishonesty that he displayed — and the lack of compassion — it really has bothered both of us that anybody can do that.”

The ombudsman concluded Equity Associates should pay the couple back in full, because it allowed Fried to invest their money without knowing what their risk tolerance was.

Mutual fund dealers must obtain a written declaration of a client’s preferences for each investment account. The ombudsman found Equity Associates didn’t do that in this case.

The ombudsman's recommendations aren’t binding, however, and the company refused to compensate. It is among a growing list of dealers refusing to pay in the last three years. Those firms were deemed responsible for a total of $1.4 million worth of client losses.

The Small Investor Protection Association said it believes some dealers are making a concerted effort to undermine the ombudsman’s office, by not paying.

“The industry for whatever reason doesn’t like what the ombudsman is doing. And the way to discredit him is to have a lot of people refuse his recommendations,” said the association president Stan Buell.

The ombudsman said it is also concerned about the spike in refusals, but not for that reason.

“We don’t believe there is a concerted effort to refuse OBSI’s recommendations,” said spokesman Tyler Fleming. He said some companies didn’t have insurance to cover compensation and others were going out of business.

Buell’s organization is lobbying Ottawa to make it mandatory for firms to follow the ombudsman's recommendations.

“It's an abysmal situation. Nobody knows the magnitude of what’s going on. We estimate it’s in the multibillions of dollars Canadians are losing to fraud and wrongdoing within the regulated investment industry," said Buell.

“We feel the government of Canada should step up and do something.”

The national industry regulator will hold a hearing into possible disciplinary action against Fried in September.

Beyond this case, the Mutual Fund Dealers Association (MFDA) also alleges he falsified or copied the signatures of several other clients and improperly pocketed almost $10,000 in fees in 21 cases.

Those allegations have not been proven. Fried has filed a response, denying any wrongdoing.

The regulator said it has disciplined 200 members in the last three years for violations involving blank signed forms, signature falsification and “other issues” involving client signatures.

“Since 2012, the MFDA has implemented a bulk-track process to enable the hearing of multiple hearings in one sitting. This has enabled the MFDA to bring forward a large proportion of blank signed form cases to a hearing in order to send a strong message of general deterrence against this activity,” the regulator said.

The ombudsman said it also hears cases of “signature irregularities,” but it said it doesn’t report them to police.

“We don’t have the same tools as the courts or police to detect criminal activity, nor is it our role to do so. OBSI’s role is to determine whether compensation is warranted, not to sanction or punish individuals or firms,” said Fleming.

Buell said his group reported 10 cases of alleged forgery to the RCMP a few years ago, but nothing came of that.

“I think they should face criminal charges,” said Buell. “It’s common practice. So if you know one person who has been victimized there are probably a hundred or more in the same boat. I see that all the time.”

The mutual fund industry regulator said it initiated discipline against 877 members in the last three years.

It said dealers lost their licences in only four of those cases, though, suggesting most got warnings or cautionary letters.

"If [salespeople are] absorbed this industry culture and you’ve been doing these things yourself, you don’t really see any harm in it. And maybe they don’t even realize it’s wrong," he said.

“I don’t think the regulators are doing their job."

Don and Elaine Hotchkiss think it’s outrageous that essentially nothing has come of their case after six years of fighting.

“You become numb after awhile,” said Elaine. “When it starts to affect your health you start to think, 'I have to put this somewhere in a corner and put it away, because it could kill you.'”