Many prominent Muslim women in Canada say they have had enough of the niqab debate and are ready for federal leaders to shift their sights toward the issues that matter. 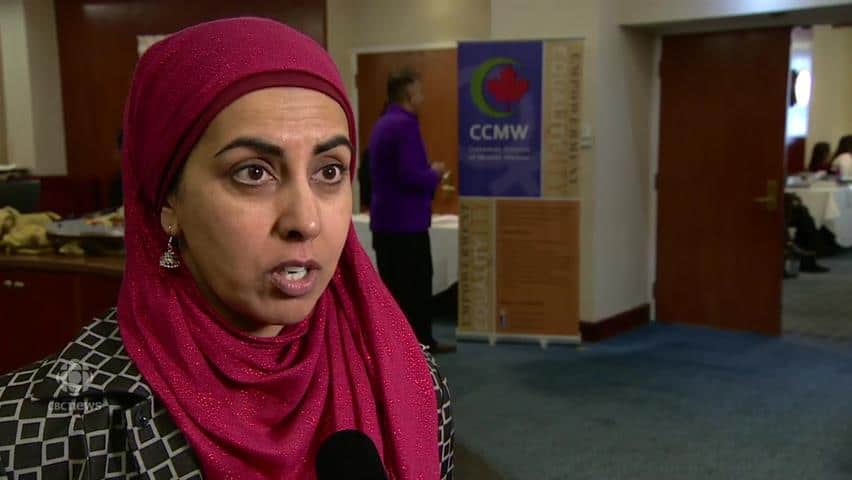 Many prominent Muslim women in Canada say they have heard enough of the niqab debate and are ready for federal leaders to shift their sights toward issues, they say, matter.

The Canadian Council of Muslim Women held an event Sunday in Toronto to hand out awards and discuss concerns in their communities. There was also an opportunity for debate between political parties on where they stand on issues affecting Muslim women in Canada.

But the debate continued to focus on wedge issues rather than major themes affecting all Canadians. That did not sit well with some Muslim women, who say the topic is "just a way to gain votes" ahead of the Oct. 19 election.

"Right now, the federal government is talking about women and [the] niqab, which is not an issue, even for Muslims," said Zarqa Nawaz, the creator of Little Mosque on the Prairie.

"We're in a recession, what is the plan to go forward? Those are the things I want to talk about. Not about women in [the] niqab and why she can't sing the national anthem with her face covered. That's just stupid."
Maryam Dadabyoy, community relations officer for the National Council on Canadian Muslims, appeared annoyed with the niqab conversation. She says the federal government should be inclusive of all Canadians.

"It's an issue that won't go away and it's not even that important," Dadabyoy said.

"We need to see a government that just makes us feel more a part of the community and not being ostracized," she continued. "Not very many women do wear [the] niqab, but it's being thrown in everyone's face."

Shaheen Ashraf sits on the national board of the Canadian Council of Muslim Women, which hosted the event. She lives in Montreal and says the hotly-debated topic is being heard in her province even though it doesn't affect her community.

"The whole niqab issue is not an issue for us," Ashraf said. Instead, she'd like candidates to focus on how Muslim dress affects their ability to move forward in society.

"If you are wearing a scarf, or, for instance, the niqab, you're not going to get a job. Your credentials don't count. [Employers] think that if you have a scarf, you don't have a brain."

Ashraf states firmly that Muslim women have the right to choose how they dress, just as any other Canadian.

"[Muslim women] feel like they're being demonized," Nawaz said.

The upcoming election should be an opportunity for Muslim women to have their real issues heard, the women say.