The race to become leader of Ontario's Progressive Conservative party is down to just two candidates after London-area MPP Monte McNaughton withdrew Thursday. 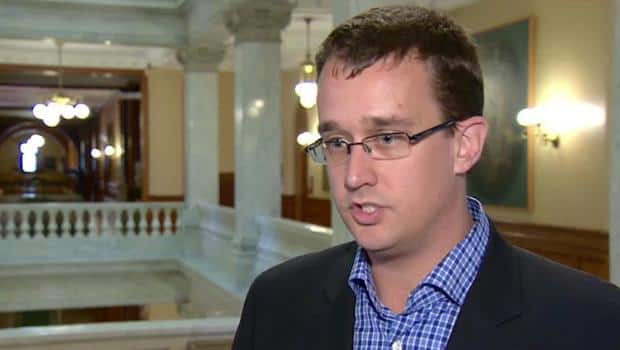 6 years agoVideo
1:41
With the exit of Monte McNaughton, there are just two people running for the Ontario PC leadership. 1:41

The race to become lead the party is now shaping up to be a tilt between Barrie MP Patrick Brown and Deputy Leader Christine Elliott. Some see that as a contest between an outsider candidate to the Ontario PCs in Brown and the establishment candidate in Elliott.

McNaughton threw his support behind Brown, but it is Elliott, the widow of former finance minister Jim Flaherty, who has the majority of support with sitting MPPs.

McNaughton was a distant third in membership sales and fundraising. He says Brown has "the energy and ability" to reform the Tories, who lost the last four Ontario elections.

Brown quickly took a shot at Elliott as the favoured candidate of the PC establishment, saying the race is now "a choice between the same old, same old, and a fresh start to rebuild the party."

Brown surprised everyone by selling some 41,000 PC memberships, but the Elliott campaign says their support is much broader and based across the entire province.

Elliott fired back at Brown, calling him untested.

"Progressive Conservatives can choose my positive, pragmatic and truly progressive conservative vision that will resonate with all Ontarians and win the next election," she says. "Or they can choose Patrick Brown, an untested candidate with nothing more to offer than a life lived as a career politician."

Elliott did not stop there, going on to say Brown has done nothing as a politician. "Worse yet, over the course of his time spent in office he has done little of significance and has no substantive record," she says.

'The blades are going to get sharpened'

Patrice Dutil, a professor in the department of politics and public administration at Ryerson University, expects that the fighting will intensify in the final weeks of the leadership race.

On Thursday, Premier Kathleen Wynne said that whoever the Tories pick as their next leader, "our priorities are very different from what theirs are."

PC party members will vote for their leadership choice in early May. The winner will be announced on May 9.

With files from The Canadian Press and the CBC's Lorenda Reddekopp