The mother of one of two young men gunned town earlier this month in Toronto is asking her son's killer to come forward.

'It's the only way you can clear your conscience' 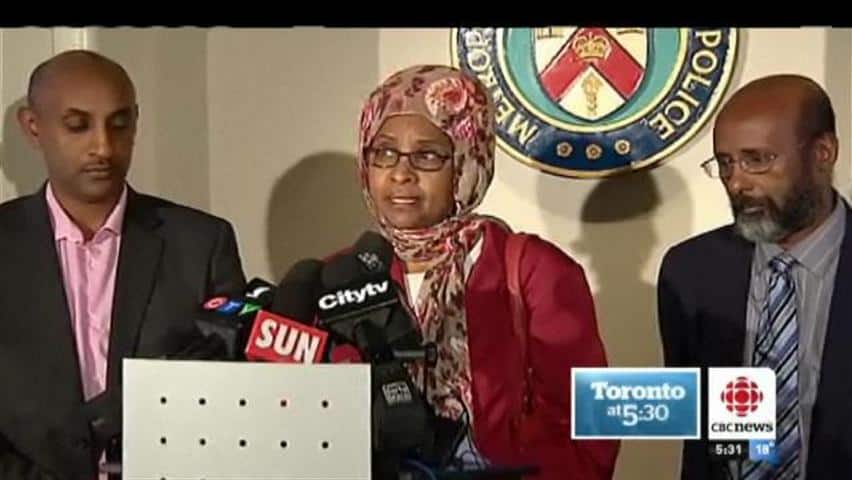 8 years ago
2:13
The investigation continues into the fatal shooting of 2 young men. 2:13

The mother of one of two young men gunned town earlier this month in Toronto is asking her son’s killer to come forward.

"I forgive you for killing my son," Habiba Adan said Friday. "But I want you to surrender yourself to the police. It’s the only way you can clear your conscience."

Adan’s son, Warsame Ali, and Suleiman Ali, both 26, were found shot dead execution-style in a laneway behind Jamestown Crescent on Sept. 18. Jamestown Crescent is located near Finch Avenue West and Martin Grove Road. The men were friends but not related.

Police said Friday they don’t know why the two men of Somali descent were shot, but police say they were clearly targeted.

Both victims lived in other neighbourhoods, and police want to know why they were in Jamestown that night.

Police have traced some of their movements on the night they died, but have a three-hour gap to fill.

Police say both victims were known to them but had no gang ties.

Images of two clothing items the victims were wearing on Sept. 18 were also released by police Friday.

Police say the victims were wearing these items earlier in the evening of Sept. 18 but they were not found on their bodies.