Peterborough police are investigating a case of arson at the city's only mosque, an act that the president of the local Muslim association says was "clearly a hate crime." 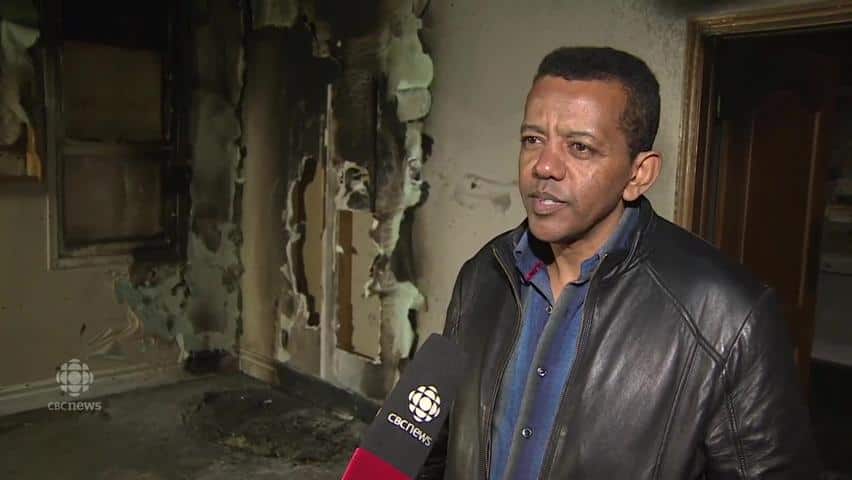 5 years agoVideo
1:51
A suspected hate crime is being investigated by authorities after the fire marshal told police the fire was set intentionally. 1:51

Peterborough police are investigating a case of arson at the city's only mosque, an act that the president of the local Muslim association says was a "clearly a hate crime."

The fire broke out at the Kawartha Muslim Religious Association's mosque around 11 p.m. Saturday, police said. No one was inside the Masjid Al-Salaam mosque at the time.

But association president Kenzu Abdella said members of the congregation had been inside the mosque at 784 Parkhill Rd. just an hour before the fire broke out there, celebrating the birth of a new baby.

"The scare for people is that what if this had happened while we were in there?" he said Sunday. "So there's a bit of uneasiness in the community."

Abdella said the Muslim congregation was devastated by the arson as members have placed roots in the community and integrated into the surrounding neighbourhoods.

The mosque holds regular open houses that are attended by churchgoers and politicians. They also make regular donations to the local food bank, according to Abdella.

"So to us, this is out of nowhere," he said. "Even when we were hearing all the things that are happening around the world, it never occurred to us that this could happen in our community."

The National Council of Canadian Muslims (NCCM) issued a news release Sunday in response to the fire.

I know the residents of Peterborough-Kawartha will be as upset about this as I am.- Maryam   Monsef , Liberal MP

"We are relieved no one was injured as this incident could have been much worse," he added.

"While deeply hurtful and offensive, Canadian Muslims know that such acts do not represent the views of the vast majority of their fellow Canadians or of the residents of Peterborough," Gardee said in the statement.

The organization thanked local religious and political leaders for their words of support. Gardee also called on Canadians to remain vigilant against suspicious behaviour.

There have been concerns that Friday's attacks in Paris could incite a rise of Islamophobia or retaliatory violence around the world.

Abdella said that since the Kawartha Muslim Religious Association was founded in 1994, there has been only one other attack on the local mosque.  After the 9/11 attacks, the previous building had its windows smashed.

But Abdella noted that local churches raised funds to replace them, something that was already happening again Sunday. A community group has also begun a crowdfunding campaign that had raised $48,000 by Monday morning.

"So it's very positive in that way," he said.

The community does not know where they will go for their prayers, which they observe fives times each day.

Initially, Abdella said they had hoped to open the building by the afternoon, but quickly realized that the $80,000 in smoke damage would make that impossible in the near future.

"It doesn't look good at all, it's all smoked out," Abdella said after walking through the building Sunday morning.

The provincial fire marshal ruled that the blaze was set deliberately, according to a Peterborough police spokesman.

Sgt. Tim Millard said police will not be releasing more information until the fire marshal's office finishes its probe.

The Liberal MP for Peterborough-Kawartha, Maryam Monsef, said she was thinking of those affected by the fire Saturday night.

Monsef, who is also the minister of democratic institutions, added that she wanted to wait for the full results of the police investigation before commenting further.

"I know the residents of Peterborough-Kawartha will be as upset about this as I am," the first Afghan-born MP said in a statement. "Together, we will ... demonstrate that these sorts of incidents are in no way reflective of our community as a whole."

My thoughts are with the families who visit Masjid Al-Salaam in Ptbo each week. Please see my full statement: <a href="https://t.co/0jI1UpKd45">pic.twitter.com/0jI1UpKd45</a>