Residents in Mississauga have transformed the hallways of one of the city’s high schools into a virtual storehouse, stockpiling it with clothing, bedding and furniture – all in in support of Syrian refugees.

In just 4 weeks, the school's hallways turned into a stockpile of household items. 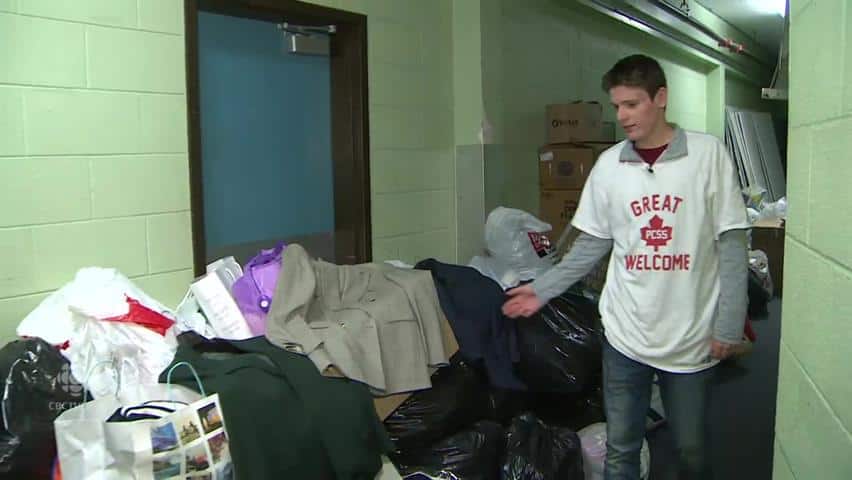 5 years ago
0:59
Greg Maule, grade 12 student at Port Credit Secondary School, shows what students have donated for refugees landed in the GTA. 0:59

You could almost mistake it for a warehouse.

But it's actually a high school where the hallways are stockpiled with clothing, bedding and furniture — all in support of Syrian refugees.

It all started when Greg Maule, a grade 12 student at Port Credit Secondary School in Mississauga, saw a horrific image that flashed around the world: the photo of three-year-old Alan Kurdi, found dead on a Turkish beach.

"Over the summer, one picture really meant something to me and it was the picture of the boy who washed up on the shores," Maule said.

Moved by the growing number of people displaced by the refugee crisis, he felt he had to act.

"Knowing that we were having these refugees show up in Canada, I wanted to make sure that when they came they'd have things for them."

So he asked the school's principal if they could do something to help.

The school put up a sign outside its doors and sent out a call to the community hoping to generate some goodwill for their cause.

'My heart was so full'

In just four weeks, the school's hallways turned into a stockpile of household items.

The principal at Riverside Public School, Paul Officer, says the children there have been dropping off donations at Port Credit for the past four weeks.

"We always get a good response for local food donations but this has been absolutely overwhelming. I've never seen a response like this. It's really heartwarming."

Parent volunteer Gaye Gould said the drive has brought the community together in some surprising ways.

"One day we had a whole bunch of grandparents … They didn't have children here or grandchildren but remembering the refugees that came as boat people in the 70s, they wanted to get involved this time too," Gould said. "My heart was so full."

Also a surprise to Gould is the number of students who've come in early to school hauling with them bags of clothing to add to the steadily filling hallways.

"Most teenagers would not want to be seen on a Mississauga bus carrying a garbage bag full of clothes but they did it and I was just blown away by that," Gould said.

So how do you move a school-full of donations?

The school enlisted the help of a five-tonne truck from the Salvation Army. The organization will help sort and organize the donations before transporting them to Lifeline Syria, a group that spearheaded the effort earlier this year to help private groups sponsor Syrian refugees.

For Maule, knowing that his efforts will go toward making refugees' new homes feel like home is the most important part of all.

"If I went home and my house had just been blown up – it's the place I go to at night to sleep, it's the place where I feel safe. For something like that to be destroyed in a matter of seconds, I don't know how that would feel," Maule said.