A provincial cabinet minister is defending the way Ontario processes requests for name changes, despite concerns that the system has loopholes that could be exploited. 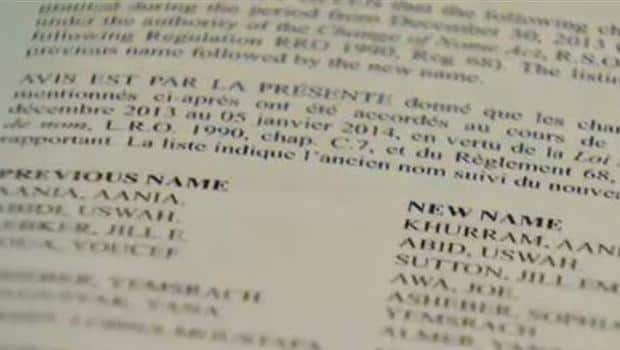 7 years agoVideo
2:58
Thousands of name changes occur in Ontario each year. The government must sift through them all. 2:58

A provincial cabinet minister is defending the way Ontario processes requests for name changes, despite concerns that the system has loopholes that could be exploited.

John Milloy, the minister of government services, told CBC News today that he believes Ontario has a rigorous system in place for checking the thousands of applications for name changes it deals with each year.

"I feel very confident in the safeguards," Milloy said at the Ontario legislature.

Here’s a list of some of the recent stats from other Canadian provinces:

In Ontario, a person who changes his or her name is required by law to disclose if they have a criminal record that has not been expunged, as well as whether they face outstanding or pending charges or court orders. Applicants are to provide those details on a form they fill out, when seeking a name change.

The form indicates that people who disclose criminal records will be required to provide a police record check with their application.

Laurie Menard, the director of communications for Service Ontario, told CBC News on Monday that the province submits the names and birthdates of all applicants aged 12 or older to the Ministry of Community Safety and Correctional Services.

Menard said that the Ontario Provincial Police Security Services, with the ministry, then checks those names against the criminal record database maintained by the Canadian Police Information Centre.

And the Minister of Government Services told CBC News that the CPIC search identifies if a person has a domestic police record.

“If you do, we then ask for a formal police check and fingerprinting, so that safeguard is in place here in Ontario,” he said.

Prior to Monday, despite repeated inquiries, the provincial government had not indicated to CBC News that a CPIC search was part of the majority of name changes.

A criminal record is also not necessarily a barrier to changing one’s name in Ontario.

The province reviews name-change requests on a case by case basis. And while there is discretion for the registrar to reject a name change request if it is believed to be for an "improper purpose," it is not clear what the criteria is for such cases.

Through a cursory review of a single month of Ontario name changes, CBC News has identified at least two cases in which the province allowed individuals with criminal records from outside the country to change their names. But because the documents the applicants submit are not made public, it’s impossible to know what the government knew when it approved their requests.

And it is not clear how the province would become aware of a criminal record from another country.

Under Ontario’s name change law, a person is supposed to have been "ordinarily resident" in the province for a year at the time that a name change is requested.

The same form that a person fills out for a name change asks the individual to say whether he or she has "lived in Ontario for the past 12 months."

A government spokesperson previously told CBC News that if that ‘no’ box is checked, or if the residency is unclear, the application for a name change will be returned to the person making the name-change request.

CBC News has learned of the case of an Ottawa man who changed his name within five months of returning home from a U.S. prison where he served time for fraud.

Joseph Hokai Tang was deported to Canada on Aug. 1, 2011, after spending 33 months behind bars in the U.S.

The Ontario Gazette listed Tang as having changed his name to Hao Ji Tang on Dec. 24, 2011.

CBC News contacted Ontario’s Ministry of Government Services to ask how Tang could receive a name change five months after his deportation from the United States. In the wake of CBC’s inquiries, the provincial government told CBC News that provincial offences officers "are currently investigating this specific matter."

Tang's lawyer told CBC News that he advised his client not to comment on this story.