You can find some of the best Cuban dishes in the GTA in a small, nondescript plaza in North York, says Metro Morning food guide Suresh Doss.

Out in the burbs, each of the Greater Toronto Area's numerous food plazas have their own distinct personality. They're all bustling, fast-talking environments that cater to communities that are looking for comfort and company through regionally specific food. There is, however, one plaza in North York that remains as one of the most incredibly unique plazas in the GTA: Plaza Latina.

Situated in a nondescript stretch near Weston Road and Finch Avenue in the Humber Summit neighbourhood, the locals refer to it as El Mercado. There's nothing especially inviting about the derelict two-storey structure looming over a parking lot peppered by potholes.

Before cars had navigational systems, it wasn't easy to find. Tucked into an area with a large West Indian, Somalian, and Vietnamese population, it is an oasis for Latin American and South American culture. My first visit was sometime in the 90s with a group of high school friends after we took a recommendation from an Ecuadorian friend's mother on where to get great empanadas.

Plaza Latina's short hallway starts with a lively barbershop, a hub of its own for men of all ages that congregate by the reggaeton-thumping speakers. A few steps in you'll see a handful of pocket-sized grocery and souvenir stores. The narrow hallway continues to lead past a few abandoned arcade machines and remnants of old record shops that come and go, into a small food court area. 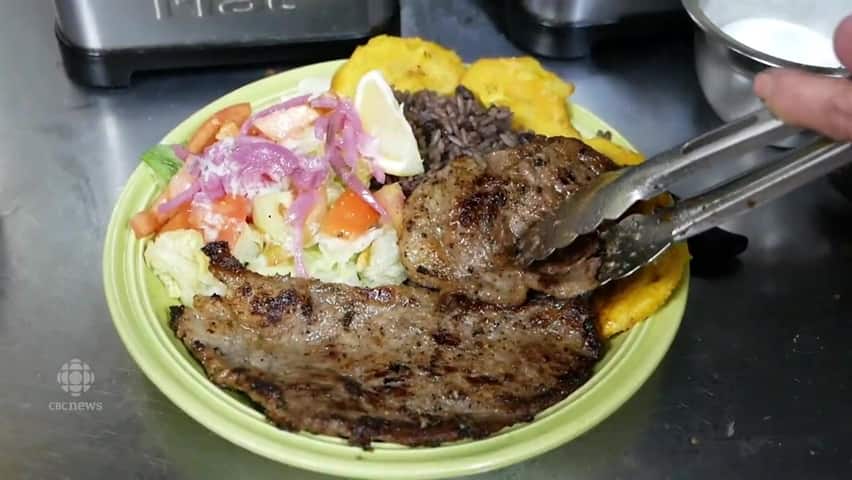 The food court is the main attraction here: nearly 360 degrees of Latin and South American food culture. Upward of a dozen countries represented under one roof. There's nothing like it anywhere else in the city. We felt like tourists in a new land, and not a single vendor spoke English. The menus on the wall were falling apart even back then, with prices scribbled on next to faded photos of dishes. We found the Ecuadorian soup and empanada stand in the corner, and it was mind blowing. Beautifully fluffy baked pastries stuffed with gooey cheese and meat. It was a revelation, something new to me.

The Plaza Latina food court is a unicorn, a space run entirely by immigrants serving their family recipes from a specific time and place. Unbridled and honest, it operates as a safe haven for those seeking a taste of home, free of modern food trends.

"This is a real community in here. We are all friends and support each other. We may not speak very good English but we are very friendly," says Isabele Fernandes.

'I was missing my home food'

Fernandes is the owner and operator of La Cubanita, a small Cuban restaurant in the plaza and one of a few in the GTA. I've been going back to Plaza Latina for years, and her stand is probably my favourite. Fernandes moved to Canada in 2003 from her homeland of Holguin, Cuba.

"My daughter moved to Canada, and she asked me to join her here. So I moved here."

Fernandes hopped around from one menial job to another, cleaning offices and helping in various restaurants. She said that although she was a well-known cook in heir home community, cooking for large groups of people regularly, she never really wanted to be a chef until she moved to Canada.

"I was missing my home food. I couldn't find Cuban restaurants in Toronto. I would make it at home," she says.

Fernandes would visit the plaza often for a taste of home, and eventually wound up working for one of the other stands.

"Then one day I was leaving the stand and everything changed," she recalls.

Fernandes noticed that one of the vendor spots was up for rent. She phoned the manager and asked him if she can take it over. He obliged.

"I said, here is my chance. Here's my chance to bring my Cuban food to Toronto."

Fernandes offers a modest menu — an assortment of proteins either grilled or baked, served with rice and grilled plantain.

"Cuban food is very simple. It is all about meat, and rice, and peas. And hot sauce, we love hot sauce," Fernandes says with an infectious laugh.

The plaza can be an intimidating place if you don't speak Spanish. Fernandes was the first to befriend me years ago, by offering me a plate of fried beef and rice.

"I only use a few ingredients in everything," Fernandes says.

'I am trying to keep my culture alive'

There are two note-worthy dishes on the menu at La Cubanita. Pierno de cerdo horneada (baked pork leg) and carne asada (fried steak). Fernandes prepares and marinates her meats overnight. The protein is marinated in a ratio- controlled concoction of pepper, salt, and garlic. Oh, be warned, there's lots of garlic. The carne asada is then fried to order, while the pork leg is slowly baked in the oven. Both are presented over a bed of beautifully plump arroz congri (Cuban rice with black beans). I swear it tastes like the rice was cooked in some fat, but Fernandes won't say. It's light and fluffy, with a silkiness to it. Then the garlic, dripping from the freshly sliced meat, soaks in and gives it a deeper notes of spice and heat.

Both cuts of meat are tender and it really comes down to whether you prefer the tender mouthfeel of beef or something akin to bbq pork, with strands of meat pulling off the bone. Both are pungent with garlic flavour, covering the meats with a nutty and sweet flavour. If you're up for it, pour a teaspoon of Fernandes's hot sauce over the meat. It's made from aji habaneros, sugar and vinegar. It will wallop your senses.

Fernandes is now a veteran at the Plaza. She's been operating her stand for nearly 15 years, cooking the same way she did when she first opened. There's no desire to change, and she says that it's not just the Cuban population in Toronto who love her food — people from all over Latin America visit her.

With a city that is constantly sprouting shiny new buildings and gentrifying, I wonder how long Plaza Latina will remain the way it is. Fernandes doesn't care, she's in for the ride. I asked her if she has plans on retiring.

"I am trying to keep my culture alive. I will be here for as long as I can," she says.

Plaza Latina is at 9 Milvan Drive in North York.