Every bowl of ramen at this Japanese restaurant is 'unique'

A few years ago during a food crawl through Etobicoke, I stumbled upon a place that changed my perception of ramen.

It was an intense layering of flavours in one bowl, the most complex  ramen  I have had to date.- Suresh  Doss

We had spent an entire day eating through some of the city's best fish and chips, Italian bakeries and Turkish restaurants. Etobicoke's food scene, sprawled across half a dozen neighbourhoods, is diverse.

After we wrapped our food tour in Mimico with some stuffed doughnuts from San Remo Bakery, I decided to skip the highway and take the lakeshore back to downtown Toronto.

The 50-year-old bakery is located on a small but bustling section of Royal York Road. But the strip dies very quickly and as you head south toward the waterfront, the landscape becomes more residential. It was there that I spotted a lonely building with a sign that read "Japanese Fast Food-Ya!"

I walked in to find a young man frantically pacing around the kitchen, tending to large pots boiling over with some sort of stock. He spotted me and quickly rushed over to seat me.

"My name is Nobu. This is my place Nobuya," he said, handing me the menus before disappearing back into the kitchen.

Moments later he came back out to take the order, then disappeared again. After he presented the food he profusely apologized and left me. "Sorry, I am the only one here. Lots of prep today," he explained.

The karaage (fried chicken) I had ordered was lightly fried but had a crusty exterior, the inside tender and juicy. I tell my friends to go to Nobuya for ramen, but also to avoid skipping the karaage at all costs. It's some of the best fried chicken you'll ever have. 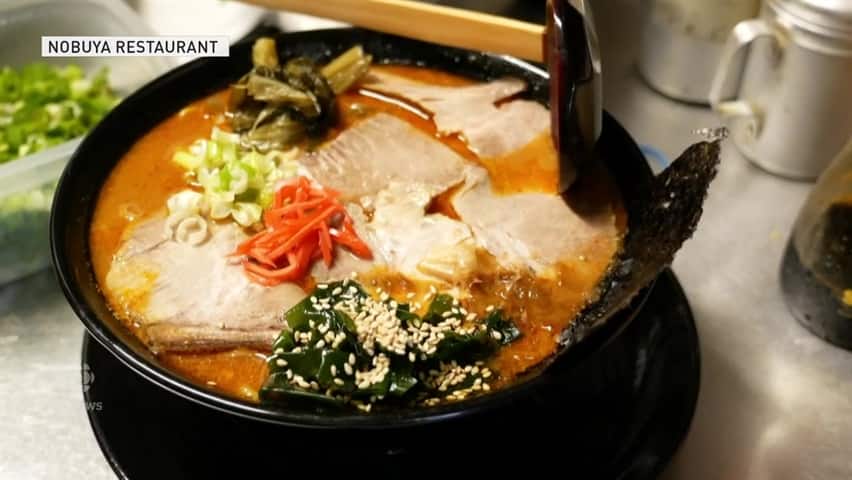 The "daily special" ramen was rich with pork fat and nuances of the sea in some form. It was an intense layering of flavours in one bowl, the most complex ramen I have had to date.

For the entire duration of my one-hour meal, I was the sole occupant of the dining room. When I went to pay I learned that Nobuya is run by one person: Nobuyuki Toyoshima, owner, server and cook.

Toyoshima hails from Tokyo. The 37-year-old spent a number of years cooking at sushi restaurants in Vancouver before moving to Etobicoke. "I needed a change of scenery. I wanted to open my own place" he said.

Four years ago, Toyoshima opened his namesake restaurant on that quiet strip of Royal York Road.

Since then, he has been the lone soldier at the restaurant, catering to a small but loyal following that comes in regularly for classic Japanese appetizers and, of course, ramen.

"I never formally trained at a ramen place" Toyoshima said.

I think that is part of the what makes Nobuya so special. He closely follows the Japanese philosophy of shokunin; taking an artisanal approach to improving one's self and works through dedication and repetition.

During one visit, I noticed he was plunging whole carcasses of lobster into the pot with pork stock. Another time, he was ecstatic about using Japanese Asari clams that had been flown in that day.

Every bowl of ramen I've enjoyed at Nobuya has been unique. Toyoshima says it is a work in progress. "I am searching for the perfect broth," he said repeatedly.

Toyoshima composes his broth to incorporate as many "accents" from sweet and savoury. "The pumpkin is for the sweetness, the seafood for the fish taste, and lots of pork fat for richness," he explained.

He makes one large pot of his base broth each day, cooking down chicken bones for three hours. The pork bones, meanwhile, need 10 hours to get the consistency that Toyoshima is looking for.

When the broth is ready to be served, he complements it with more ingredients, pouring it over two types of miso paste before dressing it with an array of seasonings from Japanese garlic to katsuoboshi (dried and fermented tuna), togarashi spice, and nori (sea weed).

From the miso pastes to the finishing sauces, Toyoshima makes all the pastes in house, further adding to the incredibly complex profile of his noodle soups.

"The noodles are the only thing I don't make yet, no room. I will make my own noodles one day" he promised.