Health officials concerned about a possible measles outbreak are asking residents to check their vaccination histories after four cases of measles in Toronto were confirmed this week. 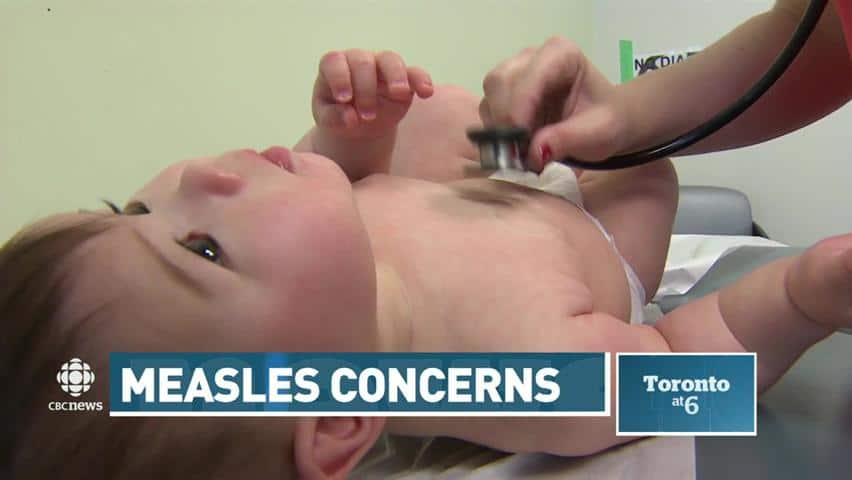 6 years agoVideo
2:47
Four confirmed cases of measles prompt fears an outbreak could be on the horizon. 2:47

Health officials are asking residents to check their vaccination histories after four cases of measles were confirmed in Toronto this week, prompting fears that an outbreak could be on the horizon.

The four cases — two in children under the age of two and two adults — are unconnected and have no known source. That's troubling because it indicates these people likely contracted the virus in Toronto rather than abroad.

"It's concerning, absolutely," said Dr. Vinita Dubey with Toronto Public Health. "It could lead to a bigger outbreak."

Most cases in Toronto, and indeed Canada, are tied to a source that has travelled elsewhere and returned carrying the virus.

"On average we expect to see five cases of measles over the year, and most of those cases have a direct link to travel. But all of these people, we know, got measles in Toronto," said Dubey in an interview with CBC's Metro Morning on Tuesday.

Mayor John Tory was asked Tuesday about the measles cases in Toronto.

The mayor said he would advise the public to follow the advice of medical professionals and get vaccinated.

He said he has "great confidence" in local health officials who are investigating the matter.

"They're the experts and we'll rely on hearing from them."

News of the four cases comes after more than 100 people, most of whom weren't vaccinated against measles, were infected in the U.S. Many of those cases were linked to a source at Disneyland.

The resurgence of the virus has reignited the vaccination debate and the thought by some people that the measles, mumps and rubella (MMR) vaccine can cause harm. Some parents also chose not to vaccinate their children for religious reasons.

An investigation by Global News last year found that multiple schools in Toronto fall below the protective herd immunity rate of 95 per cent for the measles vaccine. In other words, not enough students have been vaccinated to ensure the unlikelihood of an outbreak.

One downtown school, Alpha Alternative School, had a vaccination rate of just 43 per cent for the MMR vaccine.

Low vaccination rates make schools like Alpha a potential hotbed of cases in the event even one person walks into that school carrying "the highly contagious" measles virus, Dubey said.

While the overall coverage rate for the MMR vaccine in Toronto schools is about 91 per cent, Dubey says, health officials are closely watching the increasing rate of U.S. parents opting not to vaccinate their children.

In Canada, children can be removed from school if they have not been vaccinated. But exemptions are made on medical and religious or philosophical grounds.

Parents who do not want to vaccinate their kids must go in front of an oath commissioner and present their case. If the commissioner signs an affidavit, the parents are free to skip the vaccination.

Dubey points out that the overall exemption rate in Toronto has not changed over time, hovering between one and three per cent for the past two decades. She says, however, that the health community has to do a better job communicating the success of vaccination programs.

Also, people must realize that not vaccinating children can affect other peoples' lives and health, Dubey says.

"What you do with your life and your vaccination set has an impact on the rest of the population, and I think that is everyone's concern."