Two men are dead and one is in hospital after a shooting inside a McDonald's in Toronto's east end. Police say a confrontation escalated and "multiple shots" were fired by a security guard who was apparently at the McDonald's to buy food. 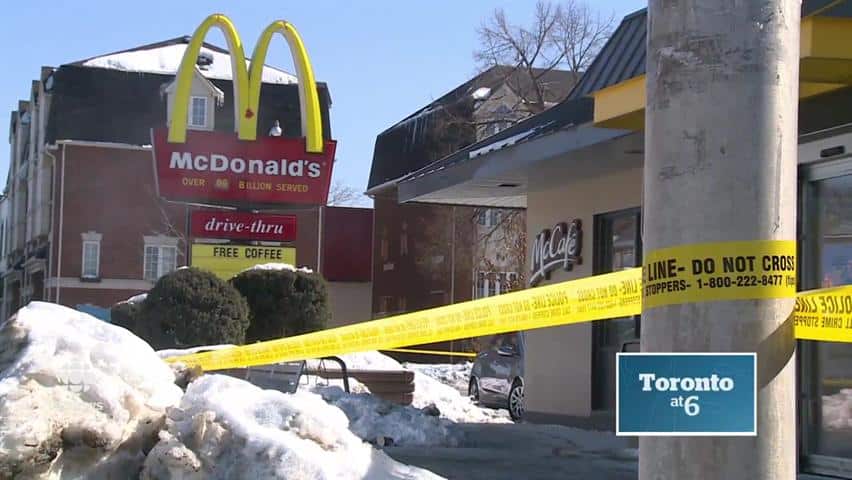 6 years ago
2:08
Two men are killed in an early morning shooting in a Toronto McDonald's 2:08

Two men are dead and one is in hospital after a shooting inside a McDonald's on Danforth Avenue near Coxwell in Toronto's east end. Police say a confrontation escalated and "multiple shots" were fired by a security guard who was apparently at the McDonald's to buy food.

It started very quickly and escalated from there.- Det.-Sgt. Terry Browne

Paramedics were called to the restaurant just before 3 a.m. Saturday. Two men, believed to be aged 25 and 40, were pronounced dead at the scene. The security guard was was taken to hospital with non-life threatening injuries to his hand.

The younger victim has been identified by friends as Donny Ouimette.

​Det.-Sgt. Terry Browne told reporters the incident took place somewhere near the food counter, and that there were between 15 and 20 people in the McDonald's at the time.

​Browne said the guard, who was employed nearby, is co-operating with investigators.

Browne said police are not looking for any suspects and the reason for the confrontation isn't yet known. Investigators are going through security video of the incident.

"I can't tell you why it started. From what I see on the video, it started very quickly and escalated from there," he told a news conference Saturday morning.

"There's no doubt that the security guard is the involved party for the discharging of the firearm, we're really trying to put the pieces together on how this all played out," Browne said.

Browne added that no one is under arrest at this point. 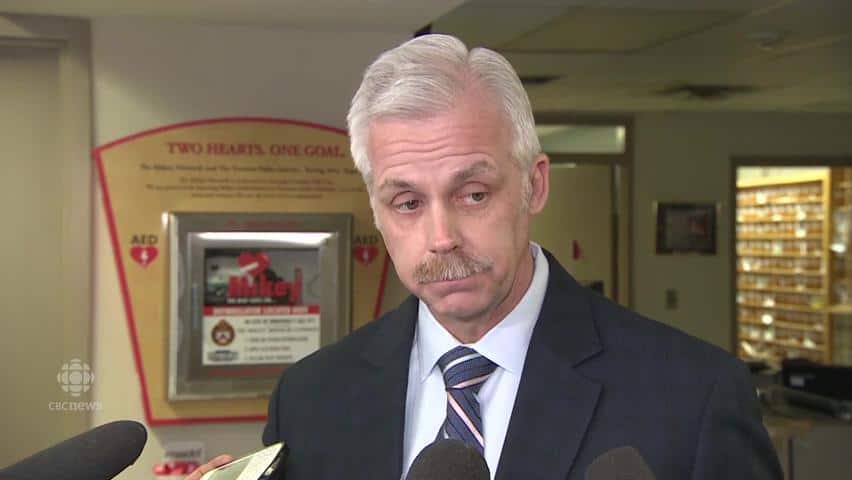 6 years ago
2:53
Det.-Sgt. Terry Browne of Toronto's homicide unit briefs reporters on the early morning shooting at an east-end McDonald's. 2:53

'They all just started fighting'

One witness, Amanda Tremblay, was in the restaurant just minutes before she shooting. She says she saw an angry confrontation between two men fitting the general descriptions of the victims.

"It was like they had come in off the street and they all just started fighting," she told CBC News.

She said she and her boyfriend left, fearing the situation would escalate.

"We know where the individual is, he's being co-operative and we'll take it step-by-step," he said.

Police say no one else in the restaurant was injured.

Browne did not say exactly where the confrontation occurred, but said it was in the "general area where customers line up for food," and wouldn't say if other weapons were involved.

Browne stressed that the investigation is in the early stages, but said the video shows "fairly significant physical confrontation … and the security guard was involved in this confrontation."

Members of the Toronto police homicide squad and forensic identification unit taped off the scene Saturday morning as the investigation continued.