Police have discovered more human remains at the north Toronto property where the dismembered bodies of seven men allegedly killed by Bruce McArthur were found in garden planters earlier this year. 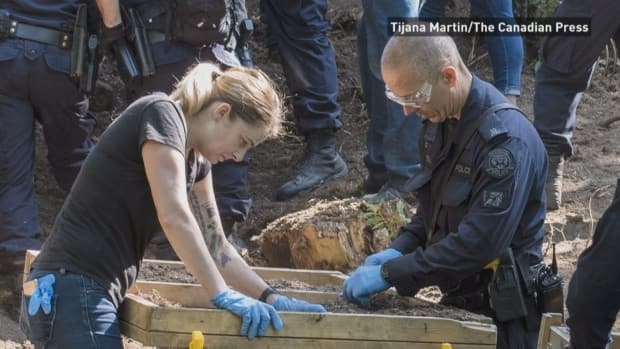 'It is essentially a compost pile. It is reused brush, dirt and human remains,' says police investigator

Police have discovered more human remains near the north Toronto property where the dismembered bodies of seven men allegedly killed by Bruce McArthur were found in garden planters earlier this year.

Det.-Sgt. Hank Idsinga, the lead investigator on the case, said the remains were uncovered in a forested ravine area. Police were prompted to focus on the ravine after canine units indicated in May that human body parts may be buried there.

"We haven't identified what the remains are or who they belonged to," Idsinga said, adding that the remains could be from those already recovered. It was the first time that remains discovered around the property were not found in planters, he said.

Police will likely be working at the site for the next several weeks, Idsinga said, as the cadaver dogs sniffed out a number of additional spots that will be thoroughly searched.

Idsinga said they have also searched about 100 properties with links to McArthur's landscaping business and cadaver dogs found few spots of interest, but after some "minor excavations," nothing was found.

VIDEO: A team of investigators sifting through soil behind the Mallory Cres. home including a pile of compost off the bank of the property in the ravine. Human remains found here yesterday w the pathologist for identification <a href="https://twitter.com/CBCToronto?ref_src=twsrc%5Etfw">@CBCToronto</a> <a href="https://t.co/XQoseayuoq">pic.twitter.com/XQoseayuoq</a>

The ravine sits at the back of the property on Mallory Crescent, in Toronto's Leaside neighbourhood, where McArthur worked as a landscaper before his arrest in January.

McArthur, 66, has been charged with eight counts of first-degree murder in the deaths of eight men, most of whom had ties to Toronto's Gay Village.

Police have found remains belonging to seven of those victims, but have been unable to locate those of Majeed Kayhan.

On Wednesday, police were seen loading black bags, filled with items collected from the ravine, into a coroner's van parked outside the home.

A police spokesperson said the bag contained "items of interest" to investigators, but that no more details will be provided until the coroner has completed testing on the contents of the bags.

The identification process could involve fingerprints, dental records or DNA analysis, he said, which would take "days, weeks or months."

Police allowed reporters down into the ravine following Idsinga's brief news conference. On the steep, forested slope, about 20 investigators were working on a section of land roughly the size of a tennis court.

Some were digging, while others sifted through excavated soil. Whatever is found will be sent to a forensic pathologist for analysis, Idsinga said.

Investigators have wanted to dig up the site for some time, but there were a number of logistical challenges that had to be worked out with the city, which controls the land.

McArthur is scheduled to be back in court on July 23.