Mary Thornton may be 100 years old, but she shows up for work every day with a famous Toronto theatre group. On Saturday, they helped her celebrate.

'A good laugh over your downfalls is the best medicine in the world,' says Thornton 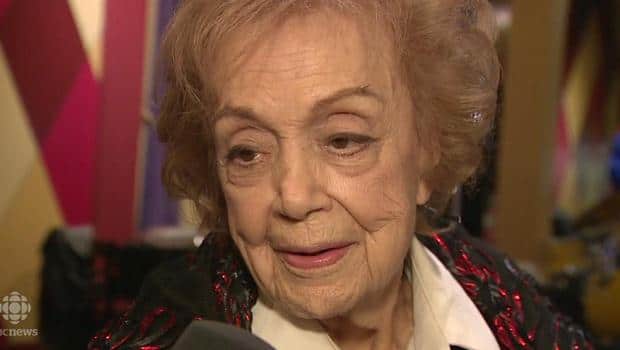 5 years ago
3:17
She may be a century old, but Mary Thornton shows up for work every day with Toronto's Famous PEOPLE Players theatre group. 3:17

She may be a century old, but Mary Thornton shows up for work every day with Toronto's Famous PEOPLE Players theatre group.

The founder of the black light puppetry group's visual effects department, Thornton was fêted for her 100th birthday Saturday with a gala and two performances, one in the afternoon and one in the evening, in her honour.

It was attended by Canada's own Alex Trebek, host of Jeopardy!, the popular U.S. trivia game show. The group unveiled a new Trebek puppet that will be part of their upcoming shows.

Famous PEOPLE Players was founded in 1974 by Thornton's daughter, Diane Dupuy, and has toured around the world. The group includes players with physical and development disabilities and is known for its elaborate set designs and clever costumes.

Saturday's event was also a fundraiser for a scholarship program that provides money to people with disabilities who aspire to learn about art, theatre and entertainment.

"I love coming here every day and see how these children work. It's so rewarding," Thornton told CBC News.

"The imagination behind our show is so unbelievable. It's the impossible, made possible."

She says that the key to her youthfulness has been comedy.

"A good laugh over your downfalls is the best medicine in the world."

Dupuy says her mother is an inspiration to people all over the globe, young and old.

"My mother woke up every single day of her life and she went to her life's calling. You do that with passion in your heart," she said.

As for stopping any time soon? Thornton says it's not something she is considering.

"Life is too precious, you can't waste on single second. It's very, very precious."