Toronto police Chief Mark Saunders says he didn't visit the Black Lives Matter protest camp because he didn't feel it would lead to a meaningful contribution to the debate about how police interact with people of colour. 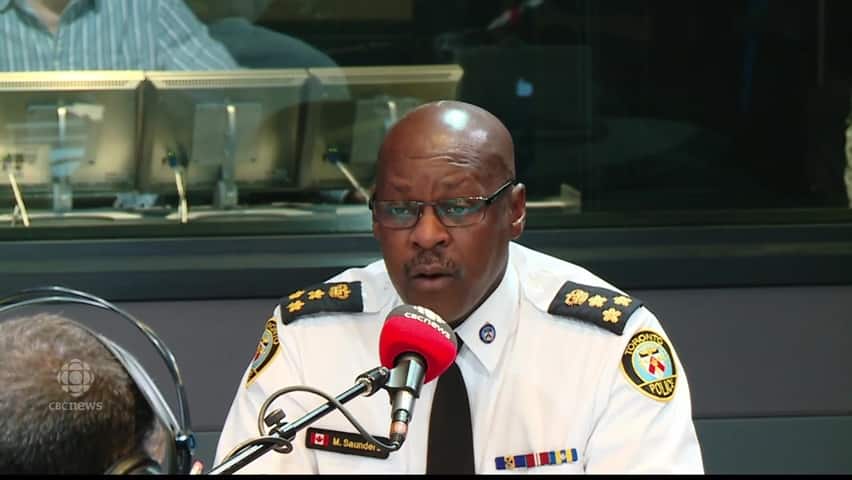 5 years agoVideo
1:18
Toronto police chief Mark Saunders says that in hindsight going outside to meet with Black Lives Matter protesters is something he'd "take a look at." 1:18

Toronto police Chief Mark Saunders says that he didn't visit the Black Lives Matter protest camp because he didn't feel it would lead to a meaningful contribution to the debate about how police interact with people of colour.

"I really didn't think that I had anything to offer," Saunders told CBC's Metro Morning Wednesday.

The protesters, who camped outside police headquarters for weeks starting in March, were demanding answers about police shootings, including one that led to the death of Andrew Loku last summer. Saunders told host Matt Galloway that the protesters' stated demands of him were not reasonable.

"Their specific demand from me was: Identify the person who shot Andrew Loku and charge him with murder," Saunders said. "And that wasn't going to happen. No. 1, it wasn't lawful and No. 2, I was not going to do that.

"[To] go out there and have that YouTube moment of people yelling, that wasn't going to move anything further."

'My door is never shut'

When asked about Ontario Premier Kathleen Wynne's decision to approach and speak with a group of Black Lives Matter protesters outside Queen's Park in April, Saunders said that he had tried to arrange a meeting with the group.

But in both instances the protesters "bailed out at the last minute," he said.

Saunders said he remains willing to meet with members of Black Lives Matter.

The chief suggested that meeting with protesters, as Wynne did, may have been the right decision.

"In hindsight, going out [to meet with Black Lives Matter protesters] is something I would take a second look at," he said.