A man was Tasered and arrested at Toronto's Pearson International Airport Thursday night, and the incident was caught on video.

Man was carrying briefcase and did not respond to calls to put it down, police said 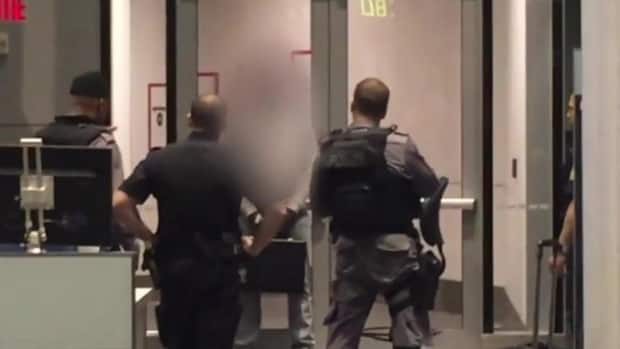 6 years agoVideo
2:55
A 19-year-old was Tased by officers after trying to enter a secure area with a briefcase 2:55

WARNING: Video contains content that may be disturbing to some.

A man was Tasered and arrested at Toronto's Pearson International Airport Thursday night, and the incident was caught on video.

Police said a 19-year-old man tried to go through a restricted door at Terminal 1 for a Turkish Airlines flight after he was refused entry to board. The man had already cleared airport security before the incident and had a boarding pass for the flight.

He was carrying a briefcase and would not respond to officers' attempts to communicate with him, according to Peel Regional Police Const. George Tudos.

A bystander at the airport in Mississauga, Ont., recorded the conclusion of the incident and posted the video to YouTube.

The video shows the man standing mostly motionless throughout his interaction with officers, but Sgt. Matt Small suggested the scene was somewhat more chaotic before the camera started rolling.

"My understanding is that he was a bit more aggressive," Small said in a telephone interview with The Canadian Press. "He was being loud, and that's what actually caused our attendance. People were concerned."

One of the officers eventually Tasered the man, who fell forward to the ground before being taken into custody. The man was detained under the Mental Health Act and transferred to a nearby hospital for assessment.

Tudos said the man "did not sustain any injuries," and has not been charged with any offence.

Police decided to use non-lethal force because the man did not seem able to communicate, Tudos said.

"Also the unknowns are there as well, too. We don't know what that male is capable of, what his intentions are, and what he was in possession of."

Police said Friday there was "nothing nefarious" in the man's briefcase.

Security consultant and former police officer Ross McLean told CBC News that in his opinion the officers involved acted appropriately given the circumstances and deployed the Taser "exactly to the spot where the manufacturer tells you to aim."

McLean said the incident is not comparable to the high-profile 2007 death of Robert Dziekanski at Vancouver International Airport. Dziekanski died after being repeatedly Tasered by RCMP officers.

"When you look at the Vancouver exercise, it was out of control," he said. In this case, police used the Taser only once and appeared to try to minimize harm to the man, which he says can be seen on the video.