Toronto police say a Liberty Village condo that was the scene of an explosion may have been operating as a drug lab. 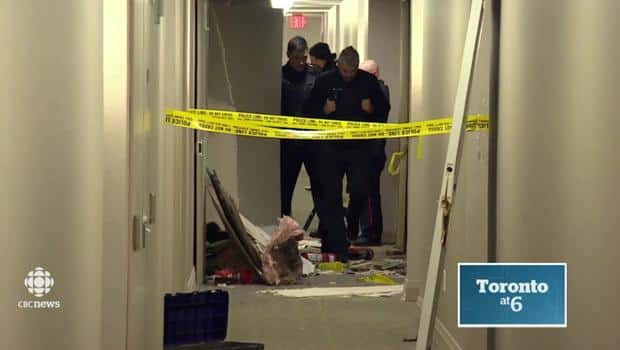 6 years agoVideo
2:53
A man has been charged in connection with an explosion at a Toronto condo building. 2:53

Toronto police say a Liberty Village condo unit that was the scene of an explosion late Monday may have been operating as a drug lab.

A 36-year-old man has been charged with possession for the purpose of trafficking, in connection with the explosion. He appeared in court on Tuesday afternoon.

The explosion inside a sixth-floor unit at 85 East Liberty St. happened last night at around 6:30 p.m.

The force of the blast sent the door from that unit into the elevators across the hall.

The suspect was inside the unit at the time, and ended up in hospital with minor burns.

Mike Kindrat lives in the unit next to where the explosion occurred. He arrived home to hear fire alarms going off.

"I came up the stairs and saw the chaos," he told CBC News on Tuesday.

Kindrat said he saw smoke "barrelling out in the hallway," while a wall outside an elevator was "pretty much blown apart."

Davida Gragor also lives on the sixth floor. The day after the blast, she said the hallway was "just a disaster," resembling "a messy construction zone."

The explosion was heard on other floors in the building.

Courtney Elliott, who lives on the 23rd floor, told CBC News that she had been in the midst of ordering a pizza when she heard a loud bang the hallway.

Residents flooded into the hallway trying to figure out what was going on.

"Later we found out it was an explosion," she said.

But the guy delivering her pizza went all the way to her unit, despite the commotion. They did not leave.

The fire marshal is investigating, as are police.

Building residents were notified Tuesday that elevator repairs are underway, but it is not clear when they will be completed.