Madison Ambos will be able to get the life-changing surgery in the United States that isn’t available in Toronto, as the Ontario Health Insurance Plan (OHIP) has agreed to fund the cost of the operation.

Three-year-old Madison Ambos will be able to get the life-changing surgery in the United States that isn't available in Toronto, as the Ontario Health Insurance Plan (OHIP) has agreed to fund the cost of the operation.

Katherine Ambos, Madison's mother, says the family received a letter Tuesday night saying that OHIP will now cover the $30,000 US cost of Selective Dorsal Rhizotomy. It's the operation little Madison needs to treat the symptoms of Spastic Diplegia, the form of Cerebral Palsy she was diagnosed with at age 13 months.

Ambos said she had picked up Madison from her dance class and drove to the Purolator depot, which was holding a letter for her. As it turns out, the letter was from the Ministry of Health, saying that the cost of the operation would be covered. 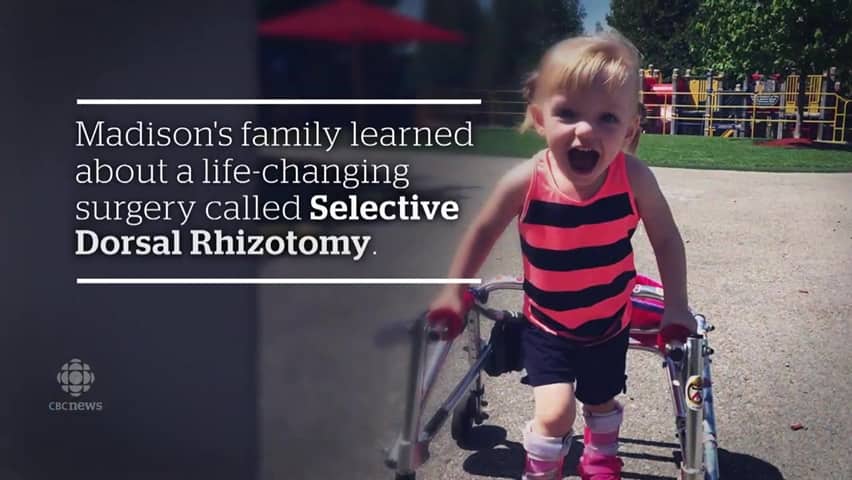 3-year-old Madison to get life-changing surgery

"It was really special to be with Madison as I was opening [the letter], because it was something that I didn't think we'd ever get and that we would just have to move forward with our money that was fund-raised," Ambos told CBC Toronto in a telephone interview.

Madison, however, didn't quite understand the magnitude of what had happened.

"Madison just wanted to know if we were going to get dinner," Ambos said. "She was hungry."

An official with the ministry confirmed that OHIP will cover the cost of the surgery, which will be performed in May by Dr. T.S. Park at the St. Louis Children's Hospital in Missouri.

Surgery once offered in Toronto

While the cost of the surgery is covered, Ambos said her family will still be on the hook for all related costs, including the cost of equipment and rehabilitation for one month in St. Louis, as well as a year's worth of rehab in Toronto.

The family had started a fundraising campaign to get Madison to St. Louis, so they will use that money for the extra costs, Ambos said.

Health Minister Eric Hoskins told reporters that an advisory group had already been asked to investigate whether Ontario should offer the surgery again. That draft report should be available "within days or weeks."

Hoskins said he's also received a joint proposal from youth rehab hospital Holland Bloorview and Sick Kids to create a clinic here that would provide both the operation and rehabilitation.

Madison feels constant stiffness, which affects her motor skills, and her feet are starting to turn inward, which will affect her ability to walk as she gets older, her parents explained earlier in this month.

She uses a tiny walker to get around, and her legs are fitted with pink braces decorated with the logo of her favourite sports team: the Toronto Blue Jays.

The SDR surgery was offered decades ago in Toronto, at the Hospital for Sick Children. Earlier this month, the ministry said it is considering bringing it back to the province, but could not offer a timeline.

As excited as the family is that they received funding, Ambos said she is worried about other families who haven't, and are struggling with fundraising.

"They're forced to look at things like take out bank loans on their house, getting second, third jobs, borrowing money from family," she said. "These families want just what we want for our daughter, and they want to give their child the chance at surgery with Dr. Park in St. Louis. So they are going to be left with a lot of debt."

The Ambos family raised more than $147,000 in a GoFundMe campaign when they thought they would be paying for all of the costs.

Now, they will use leftover money to help others, Ambros said, adding that she hopes the provincial government looks at how much money parents of children with special needs spend on therapies for their kids.

Ambos also hopes the province will reconsider its guidelines for the surgery that requires families be in a referring doctor's "catchment area."

The family first submitted the application to have the surgery covered, with the signature and the blessing of their pediatrician.

But it was rejected and they were told they needed the approval of a specialist; the issue, however, was that the specialist they needed to see was outside their area.

While the specialist never did sign the form — he did include some medical notes, which the family submitted instead, Ambos said.