Luxury retailer Louis Vuitton is going after the landlord of a Toronto-area flea market over the alleged sale of knock-offs on its property.

Luxury retailer Louis Vuitton is going after the landlord of a Toronto-area flea market over the alleged sale of knock-offs on its property.

According to documents released on April 19 in Ontario Superior Court, the brand, known for its iconic purses and accessories, claims the owner of Dr. Flea's Flea Market at Highway 27 and Albion Road is liable for the infringement of Louis Vuitton's intellectual property.

In the U.S., Louis Vuitton took on the landlord of buildings in New York City where vendors were caught with fake goods in 2006.

Lawyers representing Louis Vuitton told CBC News they were unable to comment on the case.

In the court documents, Louis Vuitton is asking the landlord to declare that they knew about the sale of counterfeit goods and is seeking damages from the landlord for negligence, vicarious liability and copyright infringement.

Lawsuit about more than 'pretty purses'

Toronto fashion lawyer Ashlee Froese says this kind of legal action is about more than "pretty purses" and involves bigger issues around public safety and the possible funding of criminal organizations.

In this case, Louis Vuitton is saying "that if the landlord knows that the tenants who they're renting the space out to are selling counterfeit products, then they have a responsibility as well," Froese said.

As far as designer brands go, Louis Vuitton can be aggressive in its approach to fake products.

The company has a department dedicated to fighting counterfeiting and its website says everyone along the supply chain should work to "protect consumers from the harm of fake products."

However, the lawyer representing the owner of Dr. Flea's Flea Market says it can be difficult for a landlord to tell when a product is an obvious knock-off.

"I don't walk by a table and say, 'Oh look at that, it's an obvious Louis Vuitton thing,'" Glenn Cohen said.

In court documents, Louis Vuitton claims vendors at Dr. Flea's Flea Market have been caught selling counterfeit products in the past. The court documents show that in 2012, Toronto police seized more than $1 million worth of knock-off merchandise from about 16 booths on the property.

In the same court filing, Louis Vuitton has also sought legal action against several individual vendors at other Toronto-area flea markets, including one that operated out of a flea market at Dixie Rd. and Highway 401.

The owner of that flea market, Neeta Walia, says he has kicked out two vendors for selling counterfeit goods in the past few months.

When he finds a booth selling counterfeit goods, he says, "We try our best to tell them to leave."

But with high turnover, he says it can be hard to police the vendors at a large operation. "The new face comes and then we have to do it again," he says. 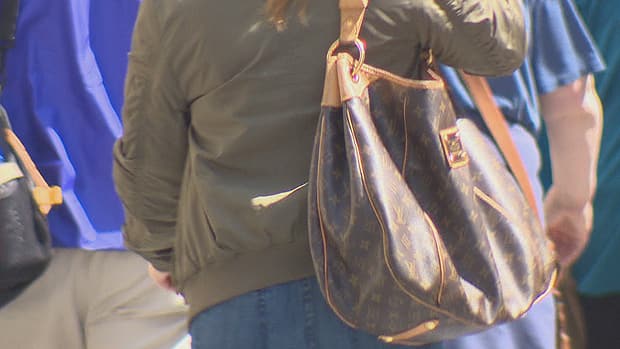 3 years ago
1:40
Luxury fashion company Louis Vuitton is taking on a Toronto landlord in its latest effort to fight the sale of knockoffs 1:40

Despite the difficulties, Walia says taking a hard line against counterfeiting is for the good of his business.

"When the police come," he says, "other vendors suffer."

Sarah Bridge is a CBC journalist based in Toronto. She has worked as a producer, writer and reporter at CBC bureaus across Canada since 2008.