Little Madi Ambos one step closer to walking on her own after cerebral palsy surgery in U.S.

Madi Ambos, a three-year-old from Pickering who made headlines when CBC Toronto told the story of her family's difficulties getting OHIP to pay for her cerebral palsy surgery, is recovering after her operation in St. Louis.

Her favourite stuffie, purple iPad, and some apple juice — those were the first things little Madison Ambos asked for after waking up from life-changing surgery this week.

The three-year-old from Pickering underwent a three-and-a-half.hour operation Tuesday called Selective Dorsal Rhizotomy (SDR) at the St. Louis Children's Hospital in Missouri, to treat symptoms of Spastic Diplegia, a form of Cerebral Palsy.

"Feeling her legs for the first time was just unreal," said her mom Katherine Ambos, who's been documenting her daughter's journey on a blog called Madi Moves - Try And Keep Up!

"She's only ever had spastic little pointy legs. Now they are soft and squishy. She can move her ankles and feet."

Madi's surgeon, Dr. T. S. Park — who completed his fellowship training in Toronto — confirmed all of his pre-surgery predictions. He believes Madi will have a chance to walk on her own without her walker.

He also expects Madi will be able to take part in physical activities, something the Ambos family never imagined would be possible.

"When he told us all of that, that's when it hit us," said Ambos. "It was quite emotional."

For now, Madi must stay in hospital, lying flat on her back, which has been surprisingly easy for her energetic daughter, Ambos said laughing.

In a few days, she'll be discharged from hospital, but remain in St. Louis to begin physical therapy.

"It's an amazing hospital, everyone's been treating her like a queen," said Ambos.

SDR surgery was once offered at the Hospital for Sick Children in Toronto.

After CBC Toronto  shared Madi's story across the country, Ontario's Ministry of Health told the media that an advisory group had already been asked to investigate whether the province should offer the surgery again.

At the time, Health Minister Eric Hoskins said he'd received a joint proposal from youth rehab hospital Holland Bloorview and Sick Kids to create a clinic here that would provide both the operation and rehabilitation.

CBC Toronto contacted Hoskins Thursday for an update, but requests for information were not answered.

Ambos says while she's grateful for Madi's surgery, she's also thinking of the families she's met closer to home, who are hoping their children can travel south for the same surgery.

After sharing their frustration with all of the red tape they faced trying to qualify for OHIP coverage, the Ambos were delighted when the province agreed to cover the $30,000 US cost of Madi's operation.

Ambos says since then, she understands a number of families have had an easier time dealing with OHIP. 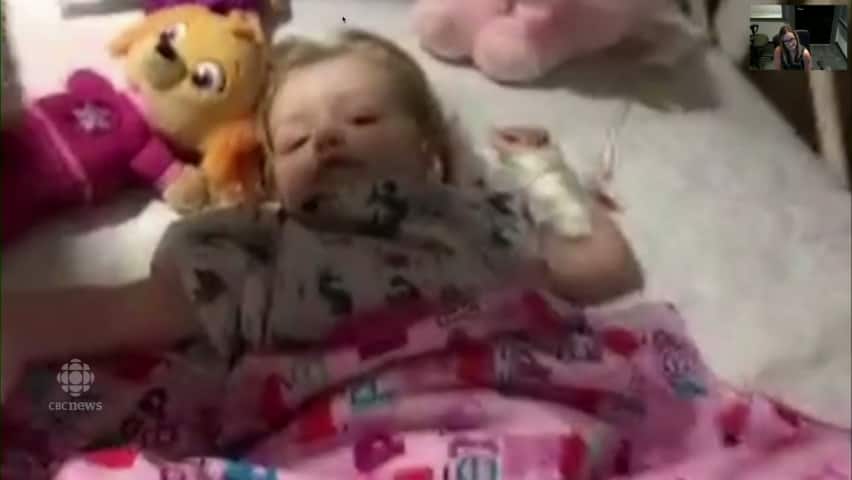 Little Madi and her mom thank their supporters

3 years ago
0:48
Little Madi Ambos one step closer to walking on her own after cerebral palsy surgery in U.S. 0:48

"All the families have been listened to. We're so thrilled Madison's story helped with that," said Ambos.

"We're not sure what the outcomes will be for those families, but it's a big step forward in a short amount of time."

The family raised more than $147,000 in a GoFundMe campaign when they thought they would be paying for the surgery, and additional required costs, including rehab and special equipment.

Now, they will use the money that's left over to help others, Ambos said, adding that she hopes the provincial government looks at how much money parents of children with special needs spend on therapies for their kids.