Maple Leafs, NHL celebrate 100 years of history with 'The Next Century Game'

The Toronto Maple Leafs and the NHL both officially turn 100 today.

Long before he ever played hockey professionally, Darryl Sittler was a fan of the Leafs. He watched the team on Hockey Night in Canada growing up in rural St. Jacobs, Ont. It was his dream to one day wear the blue and white at Maple Leaf Gardens.

"The seats just seemed to go up and up forever."

Few children that grow up playing the game and dream of being a Leaf will ever realize their childhood reveries. But many remain committed lifelong fans, drawn back again and again by unforgettable moments in franchise history.

The Toronto Maple Leafs and the National Hockey League both officially turn 100 today, and to mark the anniversary, the Leafs will host the Carolina Hurricanes in what has been dubbed "The Next Century Game."

The game is set to begin Tuesday afternoon at the Air Canada Centre, the same day the first NHL game was played in 1917.

On that day a century ago, the Montreal Wanderers beat the Toronto Arenas 10-9. The The Wanderers would go on to play just three more games before their home arena burned down. The Arenas would go on to win the Stanley Cup that season, the first of 13 for the franchise.

In 1919, the Arenas changed their name to the Toronto St. Patricks, which lasted eight seasons, before they finally became the Toronto Maple Leafs in 1927.

In the following decade, the team's popularity soared, thanks in large part to the novel idea that fans could keep tabs on the Leafs from the warmth of their living rooms. During those years, Foster Hewitt and his signature radio broadcast style were introduced to hockey fans from coast-to-coast.

Lance Hornby is a hockey columnist with the Toronto Sun, and author of several books about the Leafs, including his latest, Toronto and the Maple Leafs: A City and Its Team. Hornby said Hewitt's play-by-play on Saturday nights helped the Leafs become Canada's team.

"As one of only two Canadian teams, and of course the only English-speaking team, [the Leafs] had a large reach," Hornby said.

By the time the Second World War had begun in Europe, the Maple Leafs franchise had three Stanley Cups to its name.

The greatest decade was still to come.

'The whole city had given up on them'

In 1942 the Leafs made it to the Stanley Cup final, but quickly found themselves trailing the Detroit Red Wings 3-0 in the best of 7 series.

"Virtually the whole city had given up on them," Hornby said.

Leafs coach Hap Day made a few bold lineup changes for game four of that series, including benching some of his top players. It paid off, as the Leafs went on to win the game and eventually the series. That was the first of five Stanley Cups for the Maple Leafs in the 1940's. 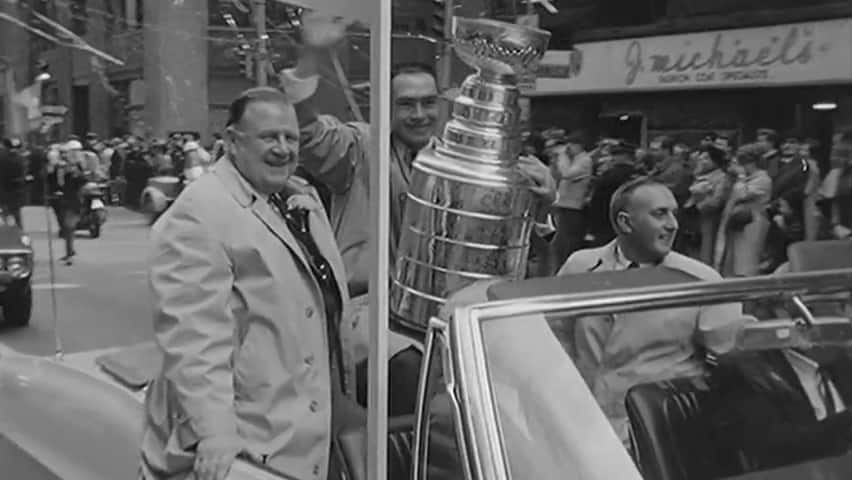 1 year agoVideo
2:03
The Leafs show off hockey's most treasured prize on the streets of Toronto. 2:03

The 1950's were a much leaner decade for the Leafs, winning just one Stanley Cup in 1951. Bill Barilko scored an overtime winner for the Leafs in game five of that series to clinch the championship. It was the last goal that Barilko would ever score. The 24-year-old was killed in a plane crash that summer.

11 years later, the Leafs would hoist the cup again in 1962, sweeping the Chicago Blackhawks in four straight games.

Dick Duff was a left winger on that team. He said it was a special feeling to bring the Stanley Cup back to Toronto after more than a decade.

The next 50 years would have its ups and downs for the Toronto team.

On Feb. 7, 1976, Darryl Sittler scored 10 points in a game against the Boston Bruins, a league record that still stands today.

"I'm proud to hold the record, proud to do it in a Leafs uniform," Sittler said.

He had six goals and four assists, and while they say records are meant to be broken, that's one that even Sittler admits is tough to beat.

"We see some of the great players that have gone through the league, with Wayne Gretzky and Mario Lemieux, you know different players that you thought might of had an opportunity to tie it or beat it and hadn't," Sittler said.

The closest the Leafs have come to getting back to the Stanley Cup final since 1967 was during the 1993 season. Led by Doug Gilmour, the Leafs managed to get to game seven of the Western Conference Final, only to fall short to  the Los Angeles Kings.

"Even though the Leafs didn't win in 1993, The fact that the franchise was so down in the dumps for so long and was able to be resurrected," Hornby said. "Still, almost 25 years later, stands as the 'post-'67 high point.'"

There were some good teams, and many good players since 1993, but none have inspired the city quite like the newest crop of young talent that will help them kick off the next century today.

"Auston Matthews, William Nylander, Mitch Marner, certainly the rebuild has come fast and furious," Hornby said. "Perhaps sometime before the next century is up the Maple Leafs may win the cup."