Nearly a third of women drink while pregnant 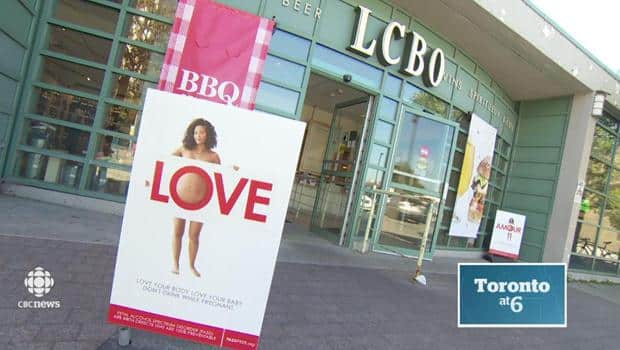 7 years agoVideo
2:58
A new campaign seeks to raise awareness about the dangers of alcohol to pregnant women. 2:58

It's the first for the provincial alcohol distributor and a win for Brian Philcox and Bonnie Buxton.

"It's a major breakthrough," said Philcox, who is on a mission to increase awareness about FAS. "We've been after [the LCBO] for 12 years!"

It was 15 years ago that Philcox and Buxton helped create the charity FASWorld and International Fetal Alcohol Spectrum Disorders Awareness Day, happening on September 9.

FAS, a pattern of mental and physical defects that can develop in a fetus with alcohol consumption during pregnancy, is an issue very close to their lives. The couple adopted a daughter who was diagnosed with alcohol-related neurodevelopment disorder. The disorder went undiagnosed for much of her youth.

Today she is a mother. And for the better part of the past decade, Brian and Bonnie have raised their grandchildren — a boy and a girl — because their daughter was unable to parent them. Just two years ago, the children returned to their mother.

Philcox says "FAS and FASD is one of the largest mental disorders affecting Canadians." This is in part because it is not easily detected.

"The damage typically appears in behavioural problems at the beginning of the child's schooling, so it's often misdiagnosed as Attention Deficit Disorder," he said.

So while Health Canada estimates that FAS affects one per cent of newborns in Canada, Philcox calls that a "conservative estimate" because it's so misunderstood. He puts the percentage at three to five per cent.

This is why Philcox wanted to get the LCBO in on a public education campaign.

He said nearly 30 per cent of women drink alcohol during pregnancy — women of all educational levels and socioeconomic groups.

In addition to the signs in stores, the LCBO has produced a training video, which features LCBO President and CEO Bob Peter, along with Philcox, and is designed to bring staff up to speed on FAS and FASD.

In 2009, several hospitals, including St. Mike's and The Hospital for Sick Children, developed diagnostic teams to work with places that have large native populations to help identify babies born with FAS and related disorders.

The annual meeting and 15th anniversary of FACE (Fetal Alcohol Canadian Expertise) Research Network is in Toronto on September 17.