A jury has found Dellen Millard and Mark Smich guilty of first-degree murder in the death of Toronto woman Laura Babcock.

A jury has found Dellen Millard and Mark Smich guilty of first-degree murder in the death of Toronto woman Laura Babcock.

The Crown argued during the trial that lasted seven weeks that Millard, 32, of Toronto, and Smich, 30, of Oakville, Ont., killed the 23-year-old Babcock and burned her body in an animal incinerator.

Babcock's family and several jurors cried as the verdict was read out, amid quiet cheers from the courtroom. 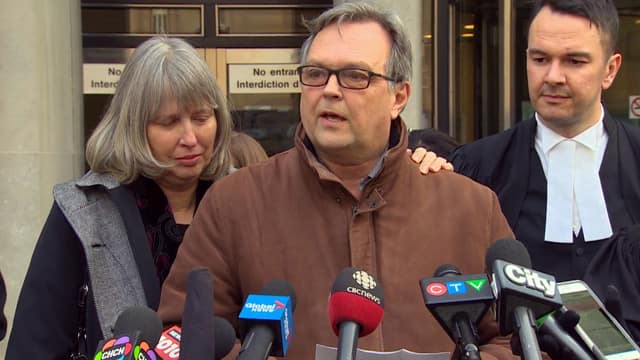 3 years ago
3:10
Clayton Babcock read a statement on behalf of his daughter's family following the guilty verdict in Laura Babcock's murder trial, which he described as a "six-week funeral." Dellen Millard and Mark Smich were automatically sentenced to life imprisonment without a chance of parole for 25 years 3:10

The pair was automatically sentenced to life imprisonment without a chance of parole for 25 years in Babock's death.

All 12 jurors recommended consecutive sentences for Millard, while only five recommended that Smich receive the maximum parole ineligibility — the seven others made no recommendation.

Justice Michael Code told jurors the consecutive sentencing provision is new to the criminal code and said the final decision on sentencing rests with him, but he will consider their recommendations.

Like any parent that loses a child, we can only move forward with the thoughts of what might have been.- Clayton Babcock, Laura's father

A sentencing hearing will likely take place sometime in the new year.

Both men are already convicted killers, serving life sentences for killing and burning the body of  Tim Bosma — something that was never mentioned in front of the Babcock jury. The jury was also kept in the dark about Millard facing another first-degree murder charge, this one in the 2012 death of his father, Wayne Millard, which was initially deemed a suicide. That trial is scheduled for March 2018.

Babcock was last seen in early July 2012. She has not been heard from since, and her remains were never recovered.

On the courthouse steps following the verdict, her father, Clayton Babcock, who attended every day of the trial with his wife, said the verdict, while welcome, did not ease his family's suffering.

"We just sat through a six-week funeral for our daughter Laura. You all know what a wonderful woman she was, as well as all the pains and struggles that she faced.

"You also know about the evil beings that took her life, and if society's lucky, we will not see them again on the streets."

Babcock went on to thank the jury, the family's lawyers, homicide detectives and all those who helped the Crown develop its case.

"Like any parent that loses a child, we can only move forward with the thoughts of what might have been," he added.

Crown lawyer Jill Cameron stressed that the trial took a toll on everyone involved in obtaining "justice for Laura Babcock.

"We're so thankful for the [Babcock] family support and we just feel so badly that they had to go through this and that Laura had to suffer at the hands of these two."

What happened to Laura?

Babcock was described in court by those who loved her most — her father, former boyfriend, and friends — as kind and bubbly. And like most 23-year-olds, she was glued to her BlackBerry.

That's why her sudden silence in early July 2012 didn't make any sense.

The defence argued Babcock may have overdosed, taken her own life or run away — she had recently started working as an escort and after fighting with her parents about curfews and house rules, she was couch-surfing.

But the idea that Babcock could just cut off contact with everyone was too cruel and something the University of Toronto graduate would never do, according to the Crown.

Court heard Babcock talked to her mom every day, often several times a day. Less than 72 hours before she vanished, she stopped by her parents' bungalow in Etobicoke, Ont., where she grew up, and left behind a suitcase, a shoebox stuffed with a thousand dollars cash and her beloved Maltese dog, Lacey.

Just the kind of things she'd take if she was running away, the prosecution pointed out.

There was no mysterious disappearance, the prosecution said, arguing that Babcock was murdered. It presented more than 80 exhibits and 40 witnesses during the trial.

Still, from the start, Crown attorneys admitted their case was complex and circumstantial. There was a mountain of evidence, cellphone records, hundreds if not thousands of text messages, photos and videos, but ultimately prosecutors told the jury it was Millard and Smich's own failed attempts to cover up the crime that was their undoing.

Plus, the Crown argued both men confessed to the killing in their own words.

A homemade video of Smich, a wannabe rapper, was played over and over again in court. The lyrics, the Crown contended, were inspired by Babcock's murder and written while her body burned in an animal incinerator.

For Millard, it was some 65 handwritten letters he sent to his girlfriend at the time, Christina Noudga. While he repeatedly instructed her to destroy them, they were found by police, scattered all over her bedroom.

In one, Millard talked "about the night Laura disappeared" saying she overdosed in his basement, after doing cocaine with Smich. Millard later wrote Noudga, "that was just brainstorming. Forget it."

Millard's apparent motive for murder was his promise to undo a love triangle. Court saw Noudga and Babcock — who had briefly dated Millard — feuded over texts.

In April 2012, Millard wrote Noudga about Babcock, "first I'm going to hurt her. Then I'll make her leave.… I will remove her from our lives."

No body, no murder: Defence

Millard, acting as his own lawyer, attempted to convince the jury he didn't care enough about Noudga to kill for her. Smich's lawyer, who didn't call any evidence, said if there was a love triangle, it had nothing to do with his client.

At the core of both defences: Babcock's body was never found, so there is no way to prove beyond reasonable doubt she is dead.

The Crown said it could, by tracing what it called Babcock's final footsteps. In the days before she disappeared, she and Millard texted and talked on the phone 110 times.

Her last outgoing phone call, to check her voicemail was made at 7:03 p.m. on July 3, 2012, and connected with cell towers near Millard's Etobicoke home.

In the weeks and months that followed, Babcock's phone continued to receive countless calls from friends and family, desperate to reach her.

But the jury was told Millard never texted, never called Babcock, not once after that night.

With files from Trevor Dunn and The Canadian Press