Thirteen-year-old Kiya Bruno performed on her biggest stage ever on Saturday afternoon. Bruno, from the Samson Cree Nation in Alberta, sang O Canada — in Cree and English— in front of thousands of baseball fans at the Rogers Centre in Toronto.

Kiya Bruno is from the Samson Cree Nation in northern Alberta 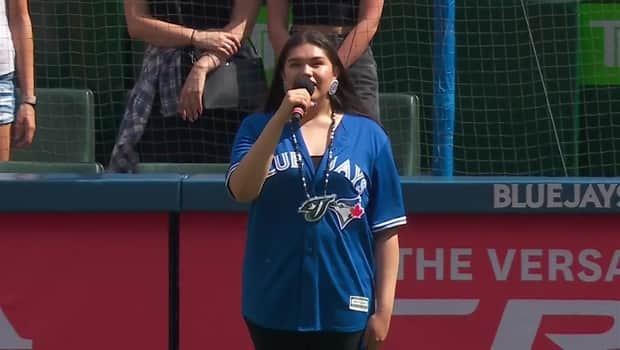 Thirteen-year-old Kiya Bruno performed on her biggest stage ever on Saturday afternoon.

Bruno, from the Samson Cree Nation in Alberta, sang O Canada in Cree and English in front of thousands of baseball fans at the Rogers Centre in Toronto.

"I'm so excited. I'm so excited for our young people to really get out and sing in their language. And to have all of our people celebrate this day with us, it's priceless," Lorraine Cobiness, chief of Niisaachewan Anishinaabe First Nation in Northern Ontario told CBC News.

The teenager was selected from among dozens of hopefuls for the performance.

"For me personally, because I'm such a baseball lover ... for the Jays themselves, for the city to acknowledge that they're here with our people and to have our young people come in and help celebrate ... It's so meaningful," Cobiness said.

Chief Anthony Cappo of the Muscowpetung First Nation in Southern Saskatchewan said "it's really good" that Bruno was given the honour of singing the national anthem on such a big stage.

"It's an honour to hear our anthem sung in a native language of this land, it is very special and it means a lot for our family back home," Cappo told CBC News.

"It's a good gesture by the Blue Jays Foundation and the Blue Jays team ... this is a good first step ... just to recognize and understand the relationship that Canada has with the First Peoples of this land."

Cappo, himself a baseball lover, said "it's actually pretty surreal for me you know, growing up on the reserve. Coming to the big lights and to the stadium here — I feel like a little kid."

Bruno's performance was among a slew of activities to honour National Indigenous Peoples Day before the Jays took on the Kansas City Royals.

Mentors from the James Bay Girls At Bat, a sports program for girls in Northern Ontario, were honoured at the game.

On the field, a two-run homer from catcher Danny Jansen and rookie Cavan Biggio's first career grand slam pushed the Blue Jays to a 7-5 victory against the Kansas City Royals.

Tara Griffith, co-ordinator of the Indigenous Rookie League at File Hills Qu'Appelle Tribal Council in Saskatchewan, said the participation of Bruno and Tookate at Saturday's Blue Jays game has served as an inspiration for members of her league.

"To me, it means the world. I feel really honoured to be part of a program that is changing lives, especially for our youth."

With files from Kelda Yuen