A Toronto alt-right rally billed as "anti-Trudeau" was cancelled on Saturday a day after Toronto police issued a statement about the protest and a planned counter-protest.

A Toronto alt-right rally billed as "anti-Trudeau" was cancelled on Saturday a day after Toronto police issued a statement about the protest and a planned counter-protest.

The alt-right rally was to be held in Kew Gardens, a park in the city's Beach neighbourhood. The counter-protest, described as anti-fascist, is underway in the form of a block party "to send the clear message that Nazis will never be welcome here," according to the event's Facebook page.

Critics said the Toronto Police Service statement, posted by 55 Division on Facebook on Friday, was condescending and unprofessional. The post was taken down a few hours after it appeared.

"In the ever-so-reliable social media world, the protest then began being spread as a white supremacist, neo-Nazi and fascist protest," the post reads.

"Do you have Donald Trump writing your posts now?" Cathy Wright asked in Facebook comments below the post.

The police's statement said: "in response to the protest having these dynamics, counter-protests were planned by various opposition groups; communists and socialists etc."

Yona Nestel, in Facebook comments, said "you should be supporting families and community members coming out to celebrate unity and diversity, not equate them to communists."

Glynn Broughton also pointed out that "if this was a [Black Lives Matter] protest I bet it would read differently."

"My previous post used language that was misleading and was a follow up to a specific thread. It offended some readers. I apologize for that," the statement read.

"It is our hope that anyone who attends any event will respect the law and everyone's right to freedom of speech. Police will continue to do what they can to ensure a safe and secure event for everyone who attends."

On Friday evening, "anti-Trudeau" rally organizer Kevin Goudreau, chairman of a group calling itself the Canadian Nationalist Front, which is described on its website as a nationalist organization that "would like to see the return to Canada's original predominantly white-European and Native Aboriginal ethnic make up," said in a tweet that Saturday's rally was cancelled.

"Taking next couple months to reorganize strengthen and build our membership base while spreading our message but will have meetings, events," he wrote.

Tomorrow's Rally is cancelled, no further rallies for the next few months.

Taking next couple months to reorganize, strengthen and build our membership base while spreading our message but will have meetings, events

Goudreau denied on his account that he is a white supremacist or neo-Nazi, despite claims of counter-protesters.

The block party in Kew Gardens, organized by several anti-fascist groups in response to the planned alt-right rally, kicked off at noon.

Upwards of 50 people gathered in the park, many holding signs that read "refugees welcome" or had messages decrying fascism. 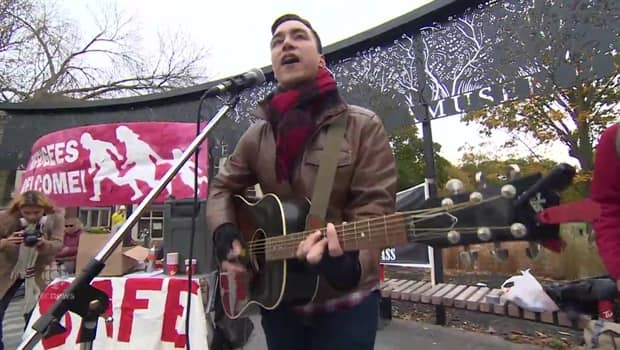 3 years agoVideo
0:14
Upwards of 50 anti-fascist demonstrators gathered in Toronto's east end on Saturday "to send a clear message that Nazis will never be welcome here." 0:14

Murtaza, a Beach resident, explained they went ahead with the block party — which began as a counter-protest — after the alt-right rally was scrapped to show that all forms of hate don't belong in the east end.

"The purpose of this gathering was to occupy the park with our energy and our people," she said.

"We can't let neo-Nazis and white supremacists feel safe enough to use this park to spread their message of hate. We want them to know that residents and people all over the city care and are going to stop them."