Two people are confirmed dead after a three-alarm fire inside a building in Toronto's Kensington Market early today. 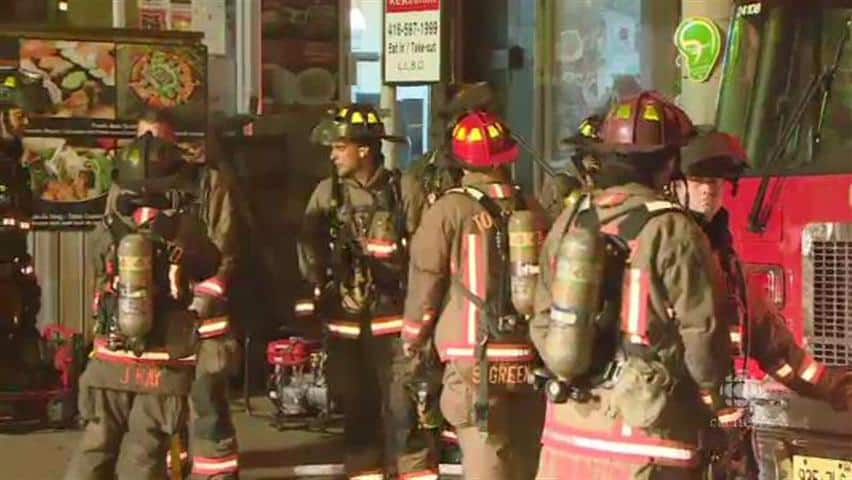 7 years agoVideo
1:39
2 people are confirmed dead after a fire inside a crowded building in Toronto's Kensington Market. 1:39

Two people are confirmed dead and 10 others were rescued after a three-alarm fire inside a crowded building in Toronto's Kensington Market early Thursday.

Just before 2 a.m., police from 14 Division responded to a call about smoke in a building at 6 St. Andrew St., near Spadina Avenue. Police rescued a woman and a child from the building before Toronto Fire Services arrived soon after.

Firefighters rescued 10 more people living in the multi-storey building, including two without vital signs who have since been confirmed dead. Among those rescued were children.

Firefighters had to make rapid, multiple rescue runs into the semi-detached building, which has restaurants on the first floor, a series of one-room apartments on the second floor, and a larger apartment on the third. Several  people were rescued from a third-floor apartment using a ladder.

"It was pretty chaotic in the first few minutes," said Green. "We quickly used every available crew member we had to get into the building and get as many people out as we could."

Green said the rescue was difficult, as firefighters had to search through a series of small apartments while battling thick smoke.

He quoted one of his firefighters, who found a crowded room on the third floor.

He opened the door and "saw nothing but eyes looking at him," said Green.

Toronto Fire Services estimates there are 20 rooms in the building and as many as 18 residents. The second floor had an unusual floor plan, with multiple single-room units with a common kitchen and bathroom.

Green said the fire was a relatively small one, with all of the victims affected by smoke inhalation.

There was no immediate word on what may have caused the fire. The Ontario fire marshal is investigating.

On mobile? Listen to an official react to the rescue efforts here.