Sexual harassment allegations have been made against at least two Ontario Liberal MPPs since Kathleen Wynne became premier in 2013, she revealed Tuesday.

Premier confirms she has dealt with "a couple" of incidents 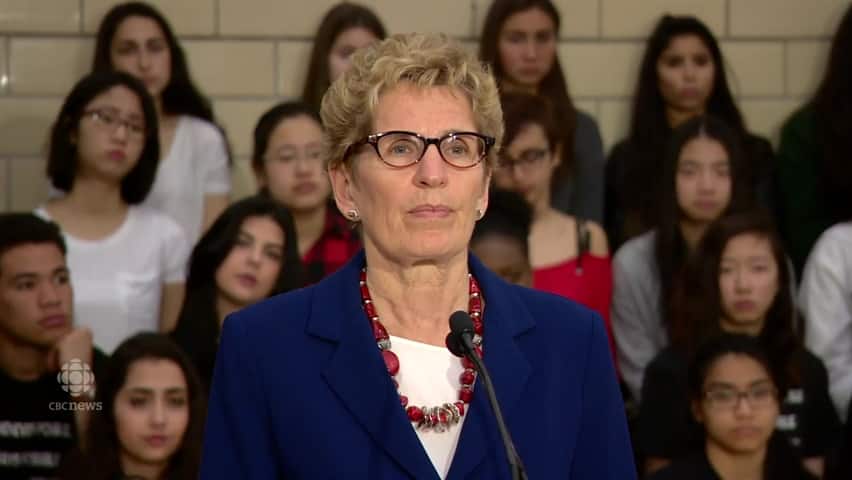 5 years ago
1:36
Premier Kathleen Wynne confirmed she had to deal with "a couple" of incidents of sexual harassment allegations against MPPs. 1:36

Sexual harassment allegations have been made against at least two Ontario Liberal MPPs since Kathleen Wynne became premier in 2013, she revealed Tuesday.

Responding to questions from CBC News, Wynne confirmed she has dealt with "a couple of instances" of sexual harassment allegations against MPPs.

But Wynne would not say what discipline the MPPs faced, if any.

"The conversations have been confidential for various reasons. Not the least of which is that the people who brought complaints forward were not looking for a public process, they were looking for a confidential process. So I'm not at liberty to talk about those situations but I have had to deal with situations and have dealt with them within the context of the code of conduct that we have in place."

Wynne recently called for PC leader Patrick Brown to kick MPP Jack MacLaren out of his caucus for telling a sexist joke.

Wynne did not indicate whether the Liberal MPPs who faced the harassment claims are still at Queen's Park.

Brown accused Wynne of being "disingenuous and hypocritical" by calling for MacLaren's ouster but refusing to say how she dealt with harassment claims.

"A level of transparency would be helpful," Brown told reporters at Queen's Park on Tuesday. "I think there's a double standard."

Brown demoted MacLaren from his position as eastern Ontario caucus chairman and ordered him to take sensitivity training.

"How we handled our situation went further than any political in Ontario has gone in terms of taking it seriously," Brown said.

"To put it bluntly, what's good for the goose is good for the gander," Horwath told reporters Tuesday. "You can't use a political advantage to criticize the way somebody else is handling a situation and not be clear and up-front about how you're handling the same kind of situation in your own team."

Horwath said she was not surprised to hear that MPPs had faced sexual harassment allegations.

"Some of my members have talked about feeling uncomfortable with inappropriate touching around this place," she said at the Legislature. "I've raised that with the other two leaders. We've talked about it in our caucus. This is not the '50s. It's 2016 and people need to be respectful of each other's individual space and be respectful of women's sexuality."

Wynne has in the past made references to dealing with harassment claims, but has never before indicated that MPPs were involved. "I'm not going to go into specifics but just know that I have taken action when allegations have been brought forward," Wynne said in November 2014.