Toronto police say Justin Bieber did not record an Instagram video from inside a downtown police station while he was being officially charged with assault on Wednesday. 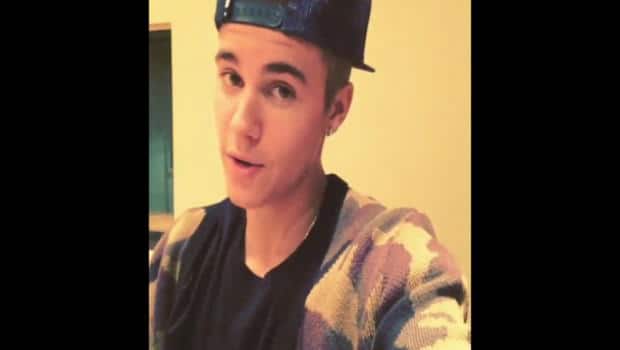 Toronto police say Justin Bieber did not record an Instagram video from inside a downtown police station while he was being officially charged with assault on Wednesday evening.

The video, which promotes the Canadian pop star's latest song Confident, was posted at about the same time Bieber arrived at the downtown station to be charged with striking a limousine driver in late December.

CBC News first broke the story Wednesday afternoon that Bieber was heading to Toronto police's 52 Division to be charged in the Dec. 30 incident, in which a driver claims he was struck in the head.

The news prompted a crowd of fans, photographers and reporters to gather outside the downtown station, creating a frantic scene when Bieber arrived in a black SUV at around 7:30 p.m.

Following a phalanx of bodyguards and police officers, Bieber had to shove his way through a crowd of fans and photographers to get inside the station.

Though it's not entirely clear where the video was shot or when, the background is reminiscent of a police station interior.

"Is the camera on? Oh yeah it is," says Bieber in the video. "What's up guys? Justin here. Confident is out right now … so go get it, go look at it, go comment."

The timing of the Instagram video's posting led to speculation that Bieber recorded the video while he was inside the police station. That prompted police to issue the following Twitter message on Thursday: "TPS [Toronto Police Service] has been asked if @justinbieber filmed a video while in our custody at 52 Division. Answer: no."

After he was officially charged Wednesday evening, Bieber slipped out another door at the station and into a second SUV, different from the one he arrived in.

His next court appearance is March 10 at Toronto's Old City Hall courthouse.

Not the right strategy

Public relations experts said Thursday that no matter where Bieber’s Instagram was produced, the decision to post it while he was being processed in a police station was ill advised.

Howard Bragman, the vice-chairman of Reputation.com, said that the move appeared to be a clear attempt to shift public attention away from the negative publicity.

"He's trying to change the conversation, but the reality is he's peeing in the ocean," Bragman said.

"It's not making a big difference. When these stories go out there, and tens and hundreds of millions of people see [them] every day, and the arrests are everywhere, one Instagram isn't going to change it."

Oscar Yuan, the vice-president of brand managers Millward Brown Optimor, said the tone of the video and the timing of its release didn't do Bieber any favours.

"The best thing brands can do when they're going through a crisis is be very aware and very cognizant of what is happening in the marketplace," Yuan told The Canadian Press.

"One, it will get lost in the fray of other things, and then two, it is actually a message about him that [says] it doesn't really bother him or doesn't concern him what's going on around him."

The appearance at a Toronto police station comes as Bieber's career is apparently on the downswing, said CBC's Eli Glasner.

His latest album, Journals, failed to crack the U.S. Billboard music charts, and his recent documentary film, Believe, only earned $6 million at the box office — far below the $73 million his first film, Never Say Never, took in.

Glasner says some have suggested Bieber's recent troubles with the law are part of a calculated effort to boost his career.

"I’ve read some people cynically suggesting that this is part of a move to kind of change his image and go for a more mature image," Glasner said. "Maybe the bad boy image will help him shed that young teen idol phase of his career."

The Toronto assault charge comes less than a week after Bieber was charged with driving under the influence and resisting arrest in Miami Beach.

News broke Thursday that a preliminary toxicology report showed that the pop star had tested positive for marijuana and the anti-anxiety drug Xanax after his arrest in Florida. Bieber had told police he had been smoking marijuana and had taken a prescription drug.

Bieber is also under investigation in a separate case for felony vandalism, in relation to an egg-throwing incident that damaged a neighbour’s home in Los Angeles County.

As of late Thursday, Bieber was still in Ontario and was believed to be spending time with friends and family. The singer reportedly stayed in Toronto’s Hazelton Hotel on Wednesday night.

The teen singer's father, Jeremy Bieber, posted a Tweet on Thursday morning, showing his son in bed with the following message: "Safe and sound #homesweethome."

It was not immediately clear where the photo was taken.

With files from the CBC's Steven D’Souza, The Canadian Press and The Associated Press