Alternative poppies distributed for free ahead of Remembrance Day 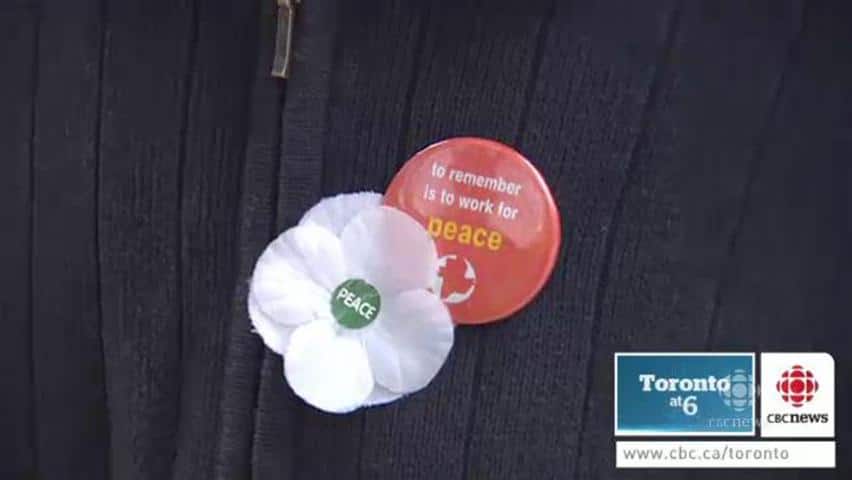 7 years agoVideo
2:42
A campaign to distribute white poppies is an affront to Canadians who fought in wars, veterans affairs minister Julian Fantino says 2:42

Fantino, an MP for the Ontario riding of Vaughan, was responding to a campaign by the Rideau Institute in Ottawa to hand out the white poppies, instead of the traditional red ones, under the slogan "I remember for peace."

But some no longer believe in what that symbol stands for.

Peter Harsnape is among those who wear a white poppy this month.

"Opting for white is against the glorification of war," he reasoned. "I think the purpose of Remembrance Day is to remember war is a terrible thing and we should make sure it doesn't happen again."

Fantino, however, said the white poppy campaign is disrespectful to Canada's veterans.

"I call on those involved to fight their ideological battles elsewhere," Fantino said in a statement released by his office Wednesday.

"Remembrance Day is about paying tribute to the valour and courage of those who set the very foundation of the freedoms that makes our country great."

The white poppy campaign is believed to have originated decades ago in the U.K.

In Canada today, organizations such as the Canadian Voice of Women for Peace make white poppies, which they hand out for free.

Fantino said the red poppy has symbolized the liberties that Canadians have enjoyed for more than 90 years.

Some people have found a compromise when it comes to choosing which symbol to wear in November.

Sandy Greenburg, who has family who served during the Second World World, wears both. The white poppy, she says, is a pledge to work for peace.

But Doug Gunn, whose father is a veteran, believes the white poppy campaign is misguided.

"Anyone who thinks soldiers selling poppies is glorifying war knows nothing about war," he said. "You'll never find anyone who hates it more. It makes me misty. My father served and couldn't talk about it until I was 18."

Meanwhile, 92-year-old Morris Polansky, who served during the 1940s, continues heading to the Eglinton subway station every year to hand out traditional red poppies.

"Everybody knows what the poppy symbolizes — remembrance. It's a Canadian institution," he said.

With files from CBC's Aarti Pole