Lawyers representing both sides of a dispute between the City of Toronto and Occupy Toronto protesters presented their cases to a Superior Court judge on Friday.

Protesters maintain society must tolerate some cost and inconvenience 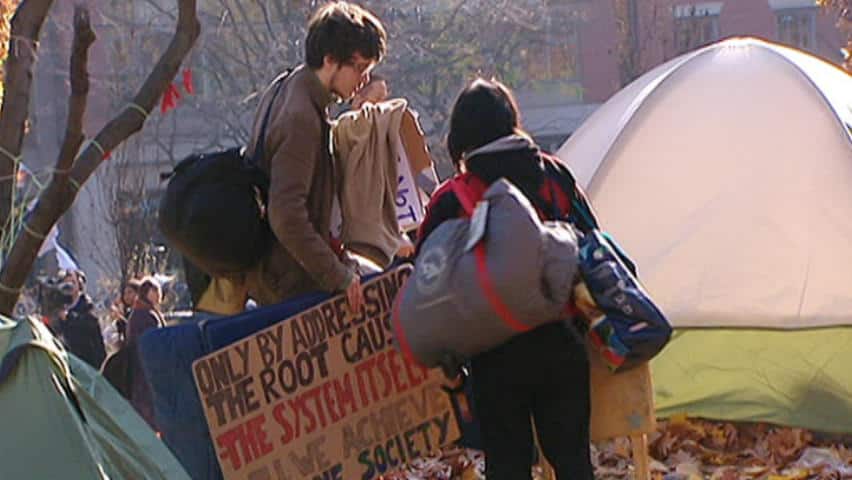 9 years ago
4:44
Cara Zwibel, of the Canadian Civil Liberties Association, speaks about her involvement in helping to protect the rights of the Occupy Toronto protesters 4:44

Lawyers representing both sides of a dispute between the City of Toronto and Occupy Toronto protesters presented their cases to a Superior Court judge on Friday.

Justice David Brown will decide whether protesters can stay in St. James Park by Monday morning at 9 a.m. ET.

Brown heard arguments from lawyers and civil liberties watchdogs in the morning, and then from lawyers for the city in the afternoon. The judge did not show much patience for the arguments in favour of Occupy Toronto, the CBC's Jeff Semple reports.

A group of Ontario lawyers has filed a complaint at the United Nations over the move by various Canadian cities to evict Occupy protesters.

In its submission to the UN's High Commissioner for Human Rights, the Law Union of Ontario says the evictions are an affront to the rights to freedom of association and freedom of peaceful assembly.

Brown repeatedly interrupted and challenged Occupy Toronto's lawyer Susan Ursel, who argued that the tents set up in the park are a "physical manifestation of the exercise of ... conscience."

Both Ursel and the Canadian Civil Liberties Association asserted that the Charter of Rights and Freedoms requires society to tolerate some cost and inconvenience as people exercise their rights to freedom of speech, assembly and association.

"If we allowed the government to decide when we've exercised our rights enough, they wouldn't really be meaningful," the CCLA's Cara Zwibel told CBC News after attending court in the morning.

The CCLA was given leave to address the court on the basis of its expertise in such cases.

Brown told the court not to read too deeply into his adversarial style.

"I'm a very aggressive questioner," said Brown. "If people think I'm inclined to one direction or another, they're dead wrong."

Advocates for Occupy Toronto focused on the demonstrators' constitutional rights, maintaining that those rights supersede any municipal bylaws that prevent people from camping illegally in a public park without a permit.

He questioned why the group did not seek a permit to use the park and why a "tree house" was erected after he ordered a halt to further construction.

He also said beating a drum for five hours is "an expression" but one that does not deserve Charter protection. Some residents have complained that protesters play percussion instruments at inappropriate hours.

The city lawyer argued that citizens are being deprived a significant right to access a public park, a problem that is more than a "mere inconvenience."

"One of the things the court is looking at is, is there a reasonable balancing of the interests of the protesters versus the public," city lawyer Darrel Smith said outside the courtroom.

"The city's notice allows the protesters to be there 19 and a half hours in a day and we think that's a reasonable compromise."

City advocates say the protest has done damage to the park, which needs to be repaired, and demonstrators must leave so maintenance staff can prepare it for winter.

Officials have also said there are health and safety risks and the occupation is infringing on the rights of local residents and business owners.

Rachel Young, who operates a business across from the park, told reporters outside court that Brown was asking the same "tough questions" the community has been asking since the occupation began. The protesters have taken over the "entire" park, she said.

"There's no way for us to share it," she said, adding that she doesn't see tents as a fundamental part of the protest. "As soon as you fall asleep in a tent, you're camping, you're no longer protesting."

Brown said his task will be "to figure out when is the line crossed between some inconvenience and beyond the pale."

Protesters have been camped out at St. James Park, located at the corner of Adelaide and Jarvis streets, since Oct. 15.

Occupy cannot move to nearby church

On Thursday, the dean of the Anglican church said his organization cannot offer safe haven to protesters occupying the adjacent park.

Some Occupy Toronto protesters have said the city's eviction notice does not apply to the parkland alongside St. James cathedral.

While the church does own some of the land, Rev. Douglas Stoute said it is up to the city to decide whether the protesters can stay. He also urged demonstrators to obey whatever ruling is handed down.

Many Occupy protesters expressed optimism after hearing they could at least stay over the weekend.

Occupy Toronto is hosting an "Evict Rob Ford" march on Saturday, an apparent response to the mayor's plan to evict them.