The Canadian Journalists for Free Expression is calling on Toronto Police to do more to identify and prosecute the culprits behind an alleged assault on one of their employees at a so-called free speech rally in Toronto last month.

'It seems like they're standing behind a wall of police protection,' says demonstrator of right-wing groups

The Canadian Journalists for Free Expression is calling on Toronto Police to do more to identify and prosecute the culprits behind an alleged assault on one of their employees at a so-called free speech rally in Toronto last month.

Kevin Metcalf, a promotions and communications coordinator for the organization, was filming at a demonstration on May 6 in Nathan Phillips Square, when he says he was greeted by name by opponents of M-103, clad in body armor and paramilitary-style fatigues, physically assaulted and threatened with death.

"We're not f--king around here. You're going to get killed," one person is heard saying in video footage capturing the incident.

M-103 refers to a motion tabled in December 2016 by MP Iqra Khalid to "condemn Islamophobia and all forms of systemic racism and religious discrimination." The House of Commons passed the non-binding motion in March by a vote of 201-97.

'Canada is in distress'

Those opposed to the motion have said it is a threat to free speech, and have held demonstrations in cities across the country, including on Saturday, to voice their concern.

"Canada is in distress and it is up to us to fix it," a GoFundMe page for a set of demonstrations called the Million Canadian March taking place on June 3 and 4 says. "Our politicians have stopped listening to us long ago. Time to change that."

In Toronto, demonstrators on both sides have faced off in the square on the first Saturday of every month for the past five months, with right-wing groups "using the language of free expression to shield themselves from public criticism," according to Metcalf.

"It is bullying, bullying the public, bullying people who criticize them, bullying refugees and Muslims — people who are deserving of the same status as anyone else in this country," Metcalf told CBC Toronto.

But equally troubling, he says, is a lack of response by officers during his alleged assault.

"The police on scene were unsympathetic. I'm not sure how they're selected to police those events. I feel like their attitude toward the political violence going on at Nathan Phillips Square has been very laissez-faire."

In the video, a man can be seen running toward Metcalf, appearing to head-butt him, while another puts his hands on Metcalf's neck, before police appear to intervene. 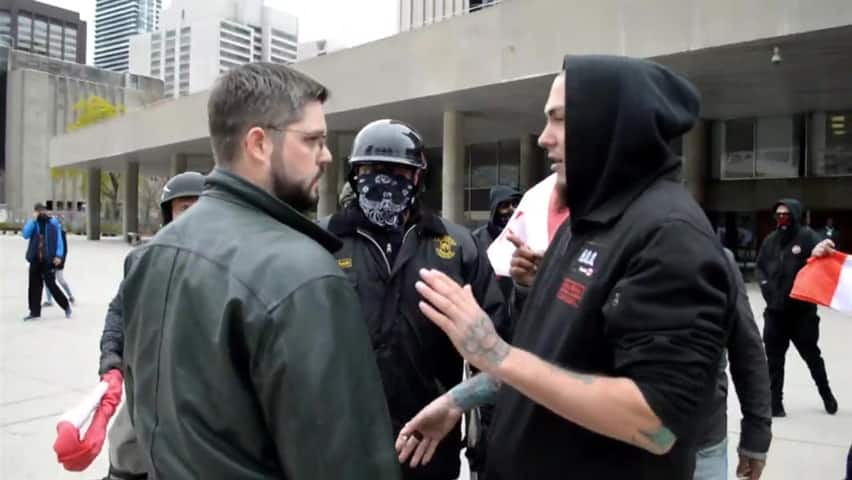 3 years ago
2:12
Kevin Metcalf, a promotions and communications coordinator for the organization, was filming at a demonstration on May 6th in Nathan Phillips Square, when he was greeted by name by opponents of M-103, clad in body armor and paramilitary-style fatigues, physically assaulted and threatened with death. 2:12

Toronto police confirm they are investigating an alleged assault and threats made at the May 6 rally, with officers from 52 Division reviewing video footage of the incident.

Meanwhile, Metcalf isn't the only one voicing concerns about police responses to demonstrators who express what some say are blatantly hateful messages.

"I think in many ways, the white supremacists that come out to city hall are empowered by the police," said Sarah Ali, a member of the Organizing Committee Against Islamophobia.

'A wall of police protection'

The fact that the climate exists for hate speech to be so popular and so present means that we can't go home.- Sarah Ali, Organizing Committee Against Islamophobia

Section 319 of the Criminal Code makes it an offence to willfully promote or publicly incite hatred against any identifiable group  based on colour, race, religion, ethnic origin or sexual orientation. It is illegal to communicate hatred in a public place by telephone, broadcast or through other audio or visual means, but the same section protects people from being charged with a hate crime if their statements are truthful or the expression of a religious opinion.

Asked about what measures police are taking to ensure demonstrators' safety, spokesperson Meaghan Gray told CBC News, "We do not speak to any specific security plans but, generally, protests are like any other event in the city.

"This means, an evaluation is done to determine an appropriate police presence.  While at the protest or event, police are expected to use their discretion and respond in a way that ensures the safety of everyone involved."

No choice but to counter-protest, say some

In a statement, the CJFE says it is "horrified by the organized and seemingly premeditated efforts to assault someone reporting on a demonstration." Death threats, physical assault and online hate campaigns against someone exercising their right to film in public spaces or voice their opinions must be condemned, the statement says.

"We're not explicitly opposed to people presenting their opinions in public, that's certainly something that as an organization we support," said Metcalf. "However when it crosses into violence… it casts a negative light on the entire free expression discussion."

Metcalf says he'll continue to turn out to such events to document them and isn't going to be deterred by the threats against him.

"I would say that the fact that the climate exists for hate speech to be so popular and so present means that we can't go home. That is the climate that we live in."