Joint Ventures: How growers are trying to stand out in the cannabis crowd

In a landscape packed with mega-weed companies, and home-growing competition, the demand for creative ideas is high.

Warren Bravo's first attempt at fish-based cultivation was a garden in his basement growing fresh vegetables for his family all year round.

But when he was introduced to the medicinal properties of cannabis, the third-generation concrete contractor saw an opportunity he couldn't miss.

He has since set up Green Relief, a 30 000 square-foot facility near Hamilton that grows weed aquaponically; a sustainable process that uses fish waste as fertilizer. 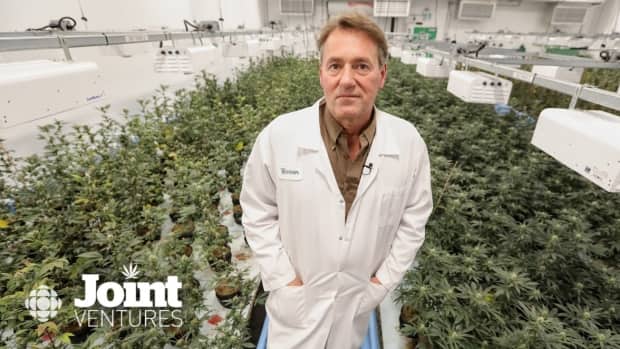 Joint Ventures: How cannabis growers are trying to stand out

3 years agoVideo
2:41
The fourth part of CBC Toronto's Joint Ventures series looks at the green rush to legalization and how businesses with the most creativity and money will be able to survive. 2:41

"We feed the fish three times a day. The fish create solid waste," he explained. The waste then goes through a number of "top secret" processes.

"We've commercialized an eco-system, entirely scalable," Bravo said, adding that the fishy set-up doesn't affect the taste or smell of the weed.

"It's impossible for an animal pathogen to pass onto a plant," he asserted.

Green Relief is one of the 89 companies licensed by Health Canada to cultivate and sell cannabis. The growth of Bravo's venture mirrors the expansion of much of the marijuana growing industry as legalization nears, by both existing licensed producers and new firms jumping in. Health Canada granted more than four times the number of licences in 2017 than it did in 2016.

And in an exploding field, the pressure is high for producers to come with ideas to stand out from the crowd.

Bravo's calling card is his 4 500 square feet of aquaponics churning out "a minimum of one pound of product per square foot," he said.

Thanks to aquaponics, his company is reaping "just shy of seven harvests per year. Nobody else gets that," Bravo claimed.

And he plans to grow even more when he finishes putting up a second building that covers 210,000 square feet..

"That'll be producing a hundred thousand pounds a year," he said.

But while research numbers have estimated the demand at an explosive 600, 000 to 650 000 kilograms of weed a year in Canada, Miles Light, CEO of Colorado-based Marijuana Policy Group, says his firm is actually predicting an over-supply.

"If all of these licensed suppliers were to execute at 100 per cent they would be able to produce almost twice as much as the demand," he said. "More than 1.1 million kilograms or more than 1,100 metric tons of cannabis is potentially going to come online in the next 18 to 24 months."

In such a packed landscape, the demand for creative ideas, like fish-waste farming is high.

"There has to be some secret sauce or some x-factor,"  Michael Lickver, executive vice president of Cannabis Wheaton, explained in an interview.

Cannabis Wheaton is a company that provides capital to cannabis companies, mainly medium to large-scale growers.

But as companies chase a creative edge in production methods, they are bracing to come up against tight branding regulations. Their concern is that they won't be able to communicate their "x-factor"  to customers in retail outlets.
"We continue to work with the federal government to encourage them to recognize that our product should have the same freedoms as substitute products — like alcohol — in terms of how we advertise and promote," said Darren Karusiuk, vice president of strategy at MedReleaf, a licensed weed producer.

Health Canada's proposed regulations do not include plain packaging, but do say there must be "strict limits on the use of colours, graphics, and other special characteristics of packaging to curtail the appeal of products to youth."

The federal agency also says packaging should also feature a health warning similar to those on tobacco products and must display the THC levels of the cannabis product within.

Some producers fear that without the freedom to distinguish their product, many consumers may turn to competitors or even the home-grown option instead.

The legalization framework proposes to allow anyone to cultivate up to four plants in their own home. But growing cannabis is not as simple as throwing together seed, soil, sunlight and water and there will be a learning curve for recreational users come legalization.

That's an opportunity that Ashley Athill intends to take advantage of.

Athill, who has a licence from Health Canada that allows her to grow weed and to distribute it to four registered medical patients, is also a teacher at The Ganja School at Hotbox Hydroponics in Kensington Market.

After honing her skills as a child on her family's farm in Jamaica and then later with an agricultural science degree, she now teaches the basics of growing weed at home.

"From seed to cure and everything in between," she said.

"From ensuring you're in the right PH range, to ensuring that your environment is properly done, your temperatures, your humidity, there's a lot of different information that needs to be passed through to an individual before they start growing if they want to do it effectively," she said.