Mayor John Tory says his SmartTrack rail transit project may look different than the plans unveiled during the last civic election campaign, but he is confident the project will be completed despite ongoing questions about the scope, timing and how the city will pay its share. 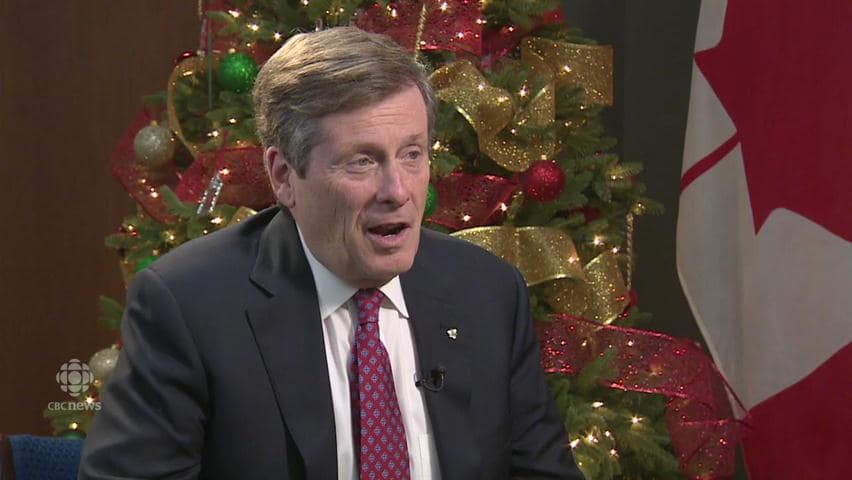 Mayor Tory on SmartTrack a year after the election

Mayor John Tory says his SmartTrack rail transit project may look different than the plans unveiled during the last civic election campaign, but he is confident the project will be completed despite ongoing questions about the scope, timing and how the city will pay its share.

The plan initially called for 22 stations to be built in seven years, but with engineering assessments pending and talks with the province on the number of stations ongoing, Tory admits that the plans will likely evolve.

"Exactly what form will it take? I think it will look similar to what we talked about during the election campaign."

Technical studies due in January

SmartTrack, a centrepiece of Tory's election campaign, calls for the construction of 53 kilometres of surface-rail transit mainly along existing GO Transit lines from Mississauga in the west, down to Union Station and up to Markham.

Tory has projected that the plan will cost about $8 billion and bring relief to Line 1 (the Yonge-University-Spadina line), which is currently operating at capacity.

Within his first six months on the job, Tory said he had secured $2.5 billion in funding from the federal government and received a commitment from the province to fund its share, as well.

But it's unclear how the city will come up with its share of the cost of an estimated $3 billion. That won't get settled until 2017.

Tory is also awaiting the results of technical and engineering assessments, which were delayed but are now expected in January.

City officials are looking various options to deal with cost and engineering challenges on the western edge of the transit line, including tunnelling from Mount Dennis along Eglinton. On the eastern edge, part of the line would run nearly parallel to the proposed Scarborough subway.

Meanwhile, SmartTrack is on a list of capital projects planned by the city that add up to more than $20 billion — all of which remain unfunded.

"It just redoubles my effort to come into work early in the morning and say, 'let's get at this,' and we're making huge progress."

As for where the project will be one year from now, Tory said many of the outstanding questions will be answered, including how many stations there will be and how the plans will proceed based on the technical assessments.

"On the principle of whether SmartTrack will be done and whether it's going to provide a huge new transit opportunity for people across this city and help relieve overcrowding on the Yonge Street subway, that remains absolutely intact."