Prime Minister Justin Trudeau says he won't get involved in the fight over Toronto city council.

Prime Minister Justin Trudeau says he won't get involved in the fight over Toronto city council.

"We're disappointed by the provincial government in Ontario's choice to invoke the notwithstanding clause, but I won't be weighing in on the debate about how big Toronto municipal council should be," Trudeau told reporters at an event in Winnipeg.

His comments came amid continued fallout over a court ruling Monday striking down legislation that would have slashed Toronto's city council to 25 from 47 ahead of October's municipal election.

A few hours after Justice Edward Belobaba released his decision, Ontario Premier Doug Ford said the government would not only appeal the ruling, but also reintroduce legislation and invoke include the notwithstanding clause.

"Anytime a government chooses to invoke the notwithstanding clause to override the charter's protections, it has to be done deliberately, carefully and with the utmost forethought and reflection," Trudeau said.

"I will trust that Ontarians will reflect on whether or not the provincial government made the right decision on overriding the Charter of Rights and Freedoms on this issue."

On Monday evening, Trudeau met with Toronto Mayor John Tory. Tory said he expressed his concern with Ford's "disconcerting move," but he didn't ask Ottawa to step in.

The mayor, who is seeking re-election on Oct. 22, said he's pushing back as hard as he can on the council cuts. He has called an emergency city council meeting for Thursday.

But Tory is also vowing to work with Ford.

He said he'll "stand up and speak out for Toronto," but added that if Ford calls on Tuesday, he'll take the call, despite the strained relationship with Queen's Park. He added he's "confident" he's handling the situation in the right way.

Jennifer Keesmaat, the city's former chief planner who is running to unseat Tory, attacked the mayor Tuesday for his relationship with the Progressive Conservative government.

In particular, Keesmaat seized on a comment made by Ford on Monday that Tory "says one thing behind closed doors and then says something totally different in front of the cameras."

Keesmaat slammed Tory saying he was a "passenger" in a position of leadership.

"In this instance, it's been deeply damaging to Toronto. That's not what leadership is about. Leadership is not about being a passenger," she said.

Keesmaat spoke to reporters at city hall briefly before being told she could not campaign on municipal property.

She demanded that the mayor answer more questions about what he knew about a potential council cut.

"Did John Tory have any discussions with Premier Ford, or past leaders of the [PC] party, including Patrick Brown, about expanding his powers or cutting the size of council in the last year?" she asked in a campaign email.

Tory has also faced some criticism on Tuesday from council colleagues who point out that he didn't support the 47-ward system when it was voted on by city council.

On CBC Radio's Metro Morning Tuesday, Tory said he still supports holding a referendum that would ask Torontonians how many councillors there should be. 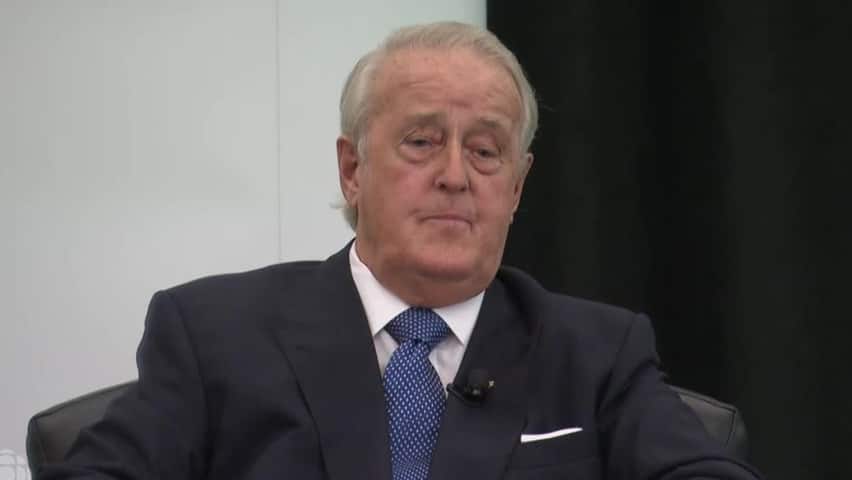 Brian Mulroney on the Notwithstanding clause

On Tuesday, morning two of the lawyers who fought against Bill 5, which cut the council's size, in court said they are prepared to go to court again if the Ford government appeals the lower court ruling.

"We're prepared to move as fast as possible with the appeal. If they have a case, as Selwyn [Pieters] said, bring it," said Rocco Achampong, a candidate for city council who also served as an applicant and lawyer in the court battle.

Selwyn Pieters, who joined Achampong in the application, described the use of the notwithstanding clause as "extraordinary."

He likened it to using "the War Measures Act to stop a school fight."

Speaking at an event in Ottawa, former Progressive Conservative prime minister Brian Mulroney said that while he was in office he "had no interest in using it, no matter what."

He added that he hasn't discussed the current case with his daughter, Caroline Mulroney, who is attorney general in the Ford government.

When he was prime minister, Mulroney described the notwithstanding clause as a "major fatal flaw" of the Constitution.

With files from Metro Morning and The Canadian Press

John Rieti is the senior producer of digital at CBC Toronto. Born and raised in Newfoundland, John has worked in CBC newsrooms across the country. In Toronto, he's covered everything from the Blue Jays to Toronto city hall. Outside of work, catch him cycling in search of the city's best coffee.