Jian Ghomeshi stood before a court today, apologizing for his "sexually inappropriate" behaviour against a former CBC employee who had accused him of sexual assault — a charge that was then dropped by the Crown attorney.

Ghomeshi has been seeing a psychotherapist for 18 months 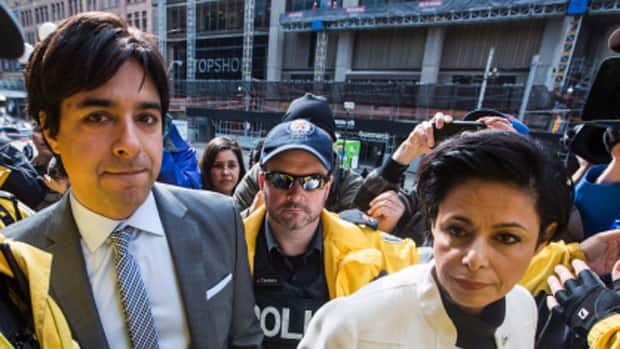 5 years agoVideo
2:54
Ex-CBC Radio host apologizes to complainant Kathryn Borel 2:54
Jian Ghomeshi stood before an open court today and apologized for his "sexually inappropriate" behaviour against a former CBC employee who had accused him of sexual assault — a charge that was then dropped by the Crown attorney.

His apology to Kathryn Borel and the peace bond he signed meant there would be no second sexual assault trial, and ended the legal ordeal the former CBC radio host has faced since Toronto police laid sexual assault charges against him in 2014.

Ghomeshi never addressed Borel directly. Instead, he looked down mostly as he stood and read from a prepared statement in front of Ontario Court Justice Timothy Lipson. His comments, which marked the first time he has spoken publicly about any of the allegations against him, came shortly after it was revealed to court that he had been seeing a psychotherapist for the past 18 months — 61 appointments to date.

No admission of guilt

Although Ghomeshi expressed regret for his actions, both his lawyer, Marie Henein, and Lipson, made it clear that this was no admission of any criminal offence or admission of guilt. However, Lipson, when setting the terms of the peace bond, said Borel "has reasonable grounds to fear that you will cause personal injury to her."

Borel,a former associate producer on Ghomeshi's show Q, had accused him of grinding his pelvis into her rear at work in 2008 and had asked the court to waive a publication ban that protected her identity. Borel, who sat in the courtroom as Ghomeshi read his statement, agreed with the Crown that they would drop the charge of sexual assault against him if he apologized and signed a peace bond.

The peace bond stipulates that Ghomeshi can have no direct or indirect contact with her, that he must pay $500, not possess any weapons and keep the peace.

Wearing a grey suit, Ghomeshi told the court, not as packed as it had been for his trial, that he would like to "apologize to Ms. Borel for his behaviour towards her in the workplace." He said that over the past 18 months, he has spent time reflecting on the incident and that he "had to come to terms with my own deep regret and embarrassment."

He said he did not always lead by example, did not show the respect to Borel that he should have and "failed to understand and truly appreciate the impact" of his conduct on Borel's work environment.

"That conduct in the workplace was sexually inappropriate. I realize that there is no way for me to know the full impact on her personally and professionally," he said.

Crown attorney Michael Callaghan told court that on Feb. 7,  2008,  Borel and Ghomeshi were working late at the office. When Borel was bending over her desk, Ghomeshi came up behind her, held her waist and thrust his pelvis back and forth into her buttocks, which lasted for several seconds, court heard.

Ghomeshi told the court that he had "crossed boundaries inappropriately " that the incident was "thoughtless" and "insensitive to her perspective" and that he now understands "how demeaning my conduct was to her."

He also apologized to his family  — specifically mentioning his mother and sister who sat in the courtroom — and whom he hugged after court proceedings ended.​

In March, Ghomeshi was acquitted by an Ontario Court judge on four counts of sexual assault and one count of choking, assaults alleged to have taken place against three women from 2002 to 2003. Ghomeshi's acquittal sparked protests and triggered outrage among many, including women's groups that felt the complainants were the ones put on trial.

In his ruling, Judge William Horkins scolded the three complainants for their "deceptive testimony," saying that there were serious deficiencies in their evidence that significantly damaged their credibility and reliability.

That trial, which began in Toronto on Feb. 1, 2016, lasted eight days. Ghomeshi had pleaded not guilty to all the charges.

Following the court proceedings, Borel spoke to the media from the courthouse steps, where about a dozen protesters had gathered earlier.  She said it was "unfortunate but maybe not surprising [Ghomeshi] chose not to say much about what exactly he was apologizing for."

She said that over the course of a three-year period, "Ghomeshi made it clear to me that he could do what he wanted to me and my body" and that there are at least three documented incidents of physical touching.

Borel said when the defence offered up an apology, she was willing to forego the trial, as it seemed the "clearest path to the truth."

"A trial would have maintained his lie, the lie that he was not guilty and it would have further subjected me to the very same pattern of abuse that I am currently trying to stop," she said.

But Borel also slammed her former employer, accusing the CBC of ignoring her complaints.

"When I went to the CBC for help, what I received in return was a directive that, yes, he could do this and, yes, it was my job to let him. The relentless message to me from my celebrity boss and the national institution we worked for were that his whims were more important than my humanity or my dignity."

Chuck Thompson, a spokesman for the public broadcaster said what happened to Borel should never have occurred and that the CBC apologizes. He said the corporation has taken steps, including providing training to recognize bullying and harassment in the workplace.