'I was willing to do anything to keep them out': Jewelry store employees use swords to fight off robbers

Surveillance video captured employees at a Mississauga jewelry store using swords to fend off a brazen daylight robbery attempt. "When we saw them coming in, that's when we really took action and we rushed them," said an employee.

Similar scene played out just months ago at another, neighbouring jeweller 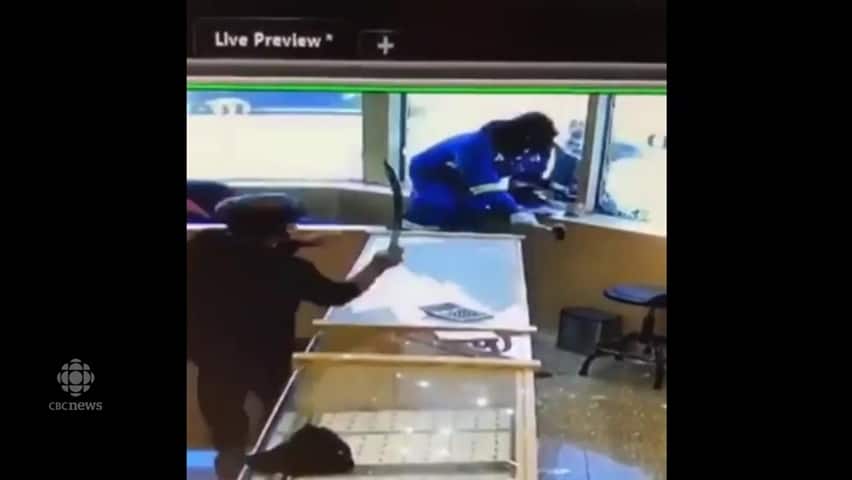 The incident happened shortly after noon on Wednesday at Ashok Jewellers, according to Peel Regional Police.

Video from inside the store shows four would-be robbers breaking a window with what appears to be a hammer, while an employee and a customer were standing just metres away.

After the intruders knocked out the window, one man attempted to climb into the store through the broken glass, but three people inside the store charged him wielding sabre-style swords.

"When we saw them coming in, that's when we really took action and we rushed them," said, the son of the store's owner.

He said one of the men had a handgun and tried to fire, but the weapon jammed.

"They had a gun but my main concern was, I wanted them to not get into my store," he explained.

"I was willing to do anything to keep them out. Even if it meant me getting shot, not a problem."

The four men fled the scene in a dark-coloured SUV, said Peel police Const. Danny Marttini. Investigators are asking the public for help in identifying them.

The third man has a heavy build, between five-foot, nine-inches and five-foot, eleven-inches tall, was armed with a handgun, and wore a black or dark-coloured jacket with a hood, blue jeans, dark shoes, and white-coloured gloves.

The fourth had a slim build and was wearing black pants, a winter jacket with a fur-lined hood and bag, and light-coloured gloves.

The store employee said the swords were gifts from a friend of the family. The store, at 7198 Airport Rd., remained open after the incident.

The police robbery and forensic units are investigating.

The owner of another jewelry store just 100 metres away also ended an attempted robbery using a sword in July.

In the wake of the two incidents, police are reminding store owners and employees to think about their own safety instead of violently confronting would-be robbers.

"I think a lot of people want to naturally defend what's theirs. At the same time, we don't want people doing things that would cause any harm to themselves," Marttini said.

"Safety is first and foremost. At the end of the day, property is property."