Under cross-examination, a Toronto police officer told a packed courtroom on Friday that he was trying to de-escalate the situation when he pulled out his gun moments before fatally shooting Sammy Yatim on a Toronto streetcar. 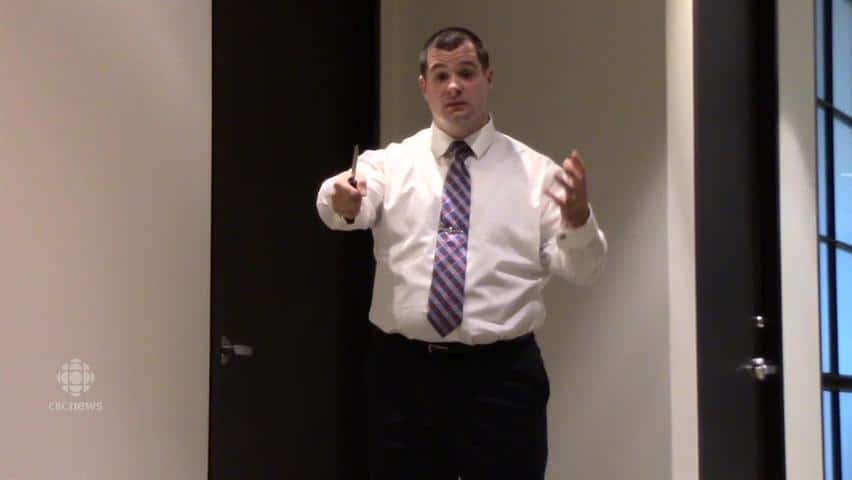 5 years agoVideo
1:22
Const. James Forcillo demonstrates his account of the streetcar shooting as Sammy Yatim in a video presented in court. The judge told the jury to disregard the audio of the video and only consider Forcillo's testimony on the stand. 1:22

A Toronto police officer told a packed courtroom Friday that he was trying to de-escalate the situation when he pulled out his gun moments before fatally shooting Sammy Yatim on a Toronto streetcar.

Const. James Forcillo has pleaded not guilty to second-degree murder and attempted murder in the 2013 shooting death of 18-year-old Yatim, who had caused a disturbance on a streetcar and was waving a knife around inside the 505 Dundas car when police arrived on the scene.

In his first chance to cross-examine Forcillo, Crown prosecutor Milan Rupic asked the 32-year-old officer why he didn't try harder to de-escalate the situation before firing nine bullets at Yatim, eight of which hit the teenager.

"Holding a firearm, that's a form of de-escalation," Forcillo said.

The officer added that for de-escalation techniques to work, "the person on the other side has to be receptive."

Forcillo raised his voice at times early in the questioning, but later adopted a calmer, matter-of-fact tone with Rupic.

Rupic, meanwhile, argued that Forcillo "abandoned and ignored" his training when it came to verbal de-escalation.

"You're right, I didn't ask if he wanted a glass of water," Forcillo responded.

Forcillo's defence, laid out during his previous two days of testimony, is that he was doing what he was trained to do and was acting in self-defence. Yatim, he said, posed a real threat to him.

The prosecution is trying to prove that Forcillo's actions weren't necessary or reasonable.

The Yatim family, who had not been present during Forcillo's earlier testimony, was at the Ontario Superior Court proceedings on Friday.

Outside court, reporters asked Yatim's mother, Sahar Bahadi, how she felt as she listened to Forcillo's testimony.

"It hurts. It hurts all the time," she said, before another family member said they had no further comment.

This is the sixth week of the trial.

Videos and audio played at the trial have shown that Forcillo arrives on the scene, yells repeatedly at Yatim to "drop the knife" then opens fire after a 50-second confrontation.

I fired the bullets at him because I thought he was a threat to my life.- Const. James Forcillo, defendant

​Forcillo disagreed with a suggestion from a Crown prosecutor that he shot the teen without reasonable grounds.

"Reasonable grounds is more than a hunch or a suspicion, it's more than a feeling," Crown lawyer Milan Rupic said as he cross-examined Forcillo.

"The shooting of Mr. Yatim is in the category of maybe he's going to attack. Until Sammy Yatim started to run down the street at you, you did not know what he was going to do."

Rupic also pressed Forcillo on his mindset when he shot Yatim.

"In your mind, officers are entitled to bark orders and make demands and expect people to follow, and you were amazed when someone didn't follow," the Crown attorney said.

"Police officers are entitled to choose what they think will work best in a particular situation," Forcillo contended.

Rupic said it was obvious Forcillo intended to kill Yatim, because he fired nine shots at the teen, leading to a tense exchange between the two men in court.

"Are you suggesting that firing nine bullets at somebody is not likely to kill him?" Rupic asked.

"I fired the bullets at him because I thought he was a threat to my life," Forcillo said.

"I'm asking if you knew you were likely to kill Sammy Yatim," Rupic asked.

Criminal defence lawyer Edward Prutschi, who has been following the case closely but isn't involved in the trial, said the defence made a risky move by having Forcillo testify first.

Things appeared to be going well when the officer was answering questions from his own lawyer, Peter Brauti.

"When the situation shifts and the Crown attorney gets to cross-examine, you are going to have a very skilled lawyer whose job it is to tear that story apart," Prutschi said.

In another unusual move, Forcillo's defence team produced a video, introduced on Thursday, in which the officer recreates the deadly incident and acts out Yatim's final moments.

Justice Edward Then instructed the jury to ignore what Forcillo says on the video but instead to rely on what the officer said in the witness box.