Jack Layton's son says his family is "holding up all right" in the wake of his father's death last week and says the whole Layton family gained "considerable strength" from the nationwide outpouring of grief. 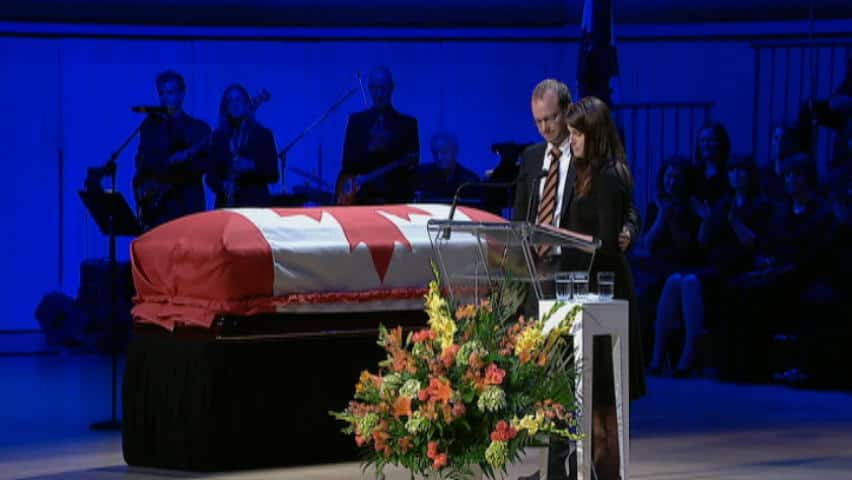 Jack Layton’s son said his family is "holding up all right" in the wake of his father’s death last week and the nationwide outpouring of grief that followed.

In an interview with Matt Galloway on CBC Radio’s Metro Morning on Tuesday, Toronto Councillor Mike Layton said his family has gained "considerable strength" from the public show of support for the federal NDP leader, who died last week at age 61 after a battle with cancer.

"Like much of his life, it was very public, it’s sort of always been that way," said Layton. "We have those private moments on vacations, or at home, playing music but it was a very public life so it seems fitting that it would be celebrated in such a fashion."

Layton said he was somewhat surprised by the emotional public response to his father’s death, which came less than four months after he led the NDP to its best-ever showing in the May 2 federal election.

Although much of the family’s mourning has been in public, Layton said there has also been time to mourn the loss of his father in private.

"In this past week, we did have some of those moments … whether it was in transit from Ottawa to Toronto or sitting in the back of a car or when we were waiting to be greeted by the many thousands of people that came by and said hello," said Layton. "We were gaining strength from that. We’re overjoyed that he touched so many people. It’s a pretty lucky life when you can say you’ve done that and we want that to be celebrated."

Layton said he hopes that his father’s death and the legacy of his life will help change people’s perception of politics.

"I think folks got a chance to look back and see what the better side of politics is, about the positive impacts it can have on people’s lives and on making them better and improving them," said Layton. "We often are very cynical of politics and perhaps often paint certain politicians in a certain light. I think by looking at a legacy of positive things we can do, of building bridges between different sides, of investing in programs that improve people’s lives, we start to think anything’s possible. And I think that’s possibly the strongest thing that he leaves us, is giving us that kind of faith and hope in what could be."

Layton said he did not know beforehand about the specifics of his father’s letter to Canadians. Written in Layton’s final days, it outlines his vision for the country and hopes for the future. It was released by the family a few hours after Layton died.

"I showed up on Saturday right after he wrote the letter but I heard it the same time everyone else did and probably cried the way many other people did at the simple beauty of it. To say things like 'love' and 'optimism' and 'hope,' it really was quite moving to the family."

"What he taught was you have to base your politics on a set of values," said Layton. "You can’t just move day to day from issue to issue, it’s all based on your personal values and that should help guide everything you do in politics."

Galloway asked Layton how the city should best remember his father, who was a Toronto city councillor before his rise to federal politics.

"I think it’s up to the people of the city," said Layton. "I think one way people can do his memory justice is go out there and work really that much harder to bring about positive change in the world, that’s what I’d really like to see."

"As for monuments, let’s let the people examine some of the options. I know the family would like to be in those discussions as well but let’s not lose sight that he really would have wanted us to continue that work together toward a better world."

Layton said his father’s death has given him new inspiration and incentive in his own work at city hall.

"I woke up yesterday morning and just had this drive to get down to city hall and to work as hard," said Layton. "I’m saddened that I won’t have him behind me in the physical sense, but I know that he left a wonderful legacy in the teaching that he did for activists and for people across the country. I think that’s really going to continue and that fills my heart with joy."