It was a school year for the history books. Here's how students will remember it

Ontario schools marked the last day of classes on Friday with much quieter — and distanced — celebrations, drawing a close to what has been a school year for the history books. Here's how some students are reflecting on the year.

Students missed out on milestones like prom, but say they're more prepared for fall 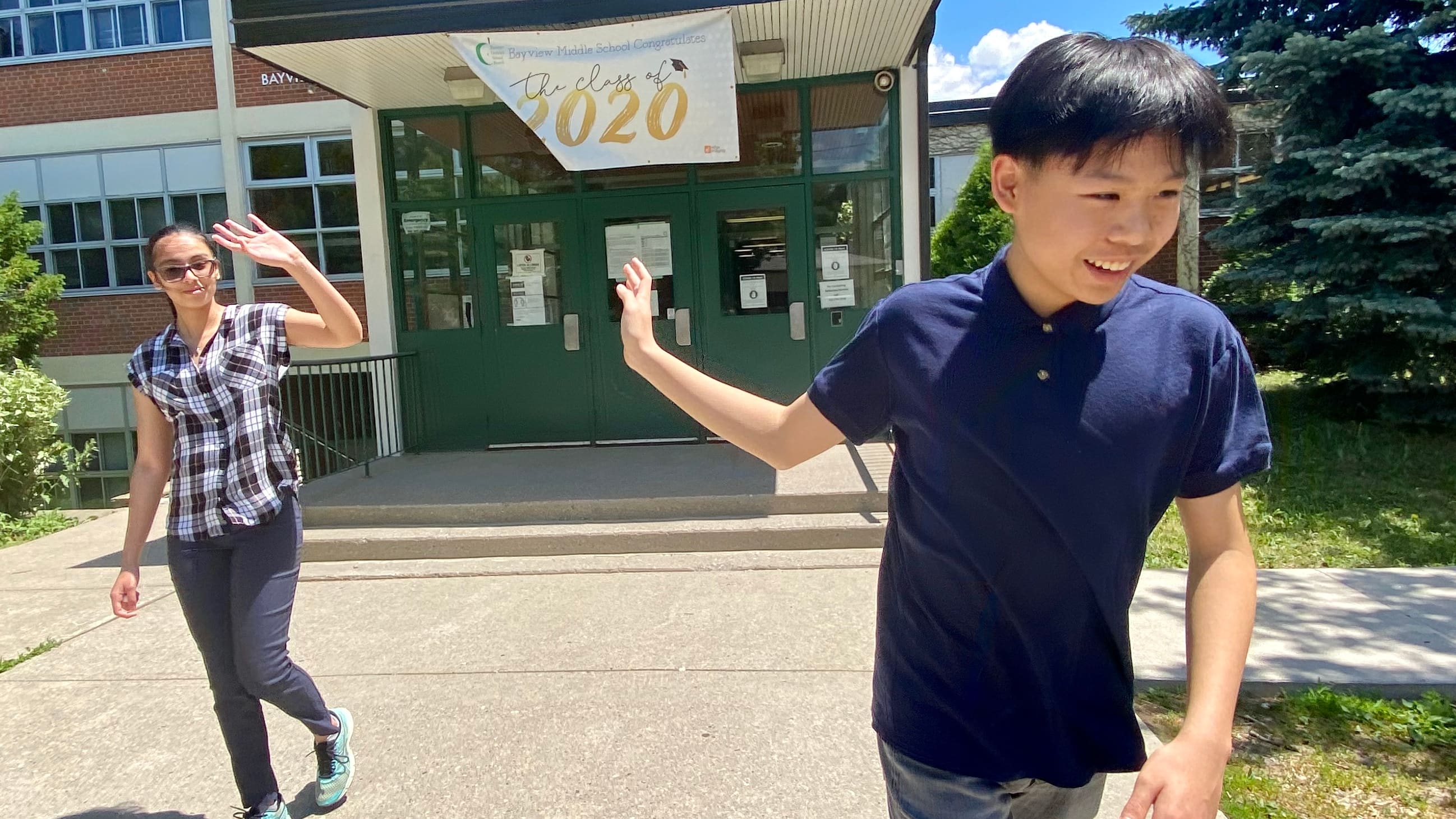 4 months ago
1:55
Today is the official last day of school. Ali Chiasson spoke with students about the experience — and the lessons they say they'll take away from it. 1:55

Ontario schools marked the last day of classes on Friday with much quieter — and distanced — celebrations than in years past, drawing a close to what has been a school year for the history books.

Instead of students clearing out their desks and lockers, they just had to shut down their computers.

"I think a lot of people learn to appreciate the presence of a class and a teacher and how much it actually helps you to learn," Domenico Opeddisano, a graduating Grade 12 student at Earl Haig High School, told CBC Toronto Friday.

Schools have been sitting empty since mid-March, when the province went into lockdown due to the COVID-19 pandemic. At no other time in history have students in the province graduated virtually or been out of a classroom setting for so long.

Opeddisano said having to switch gears and finish his final year online was a big adjustment — but he found a silver lining.

"I got a taste of what it's going to be like to have your classes and manage your own time and not have a teacher pushing you to do what you need to do," he said.

That's why Opeddisano says he's feeling well prepared ahead of his transition from high school to the University of Toronto in September.

His classmate Ivy Deng agrees all those months of virtual learning have made her a better student.

"We've learned time management, self-care, and going into post-secondary, those are important things," she said.

Deng and Opeddisano went by their high school on what was technically the last day Friday — even though the building has been empty for months — because they wanted to remember how it was before the pandemic.

And while students would usually be bursting out of the classrooms, the pair said they were taken aback by how quiet it felt.

"This is such a lively part of our school. It's so weird to see it empty," Deng said.

For graduating Grade 8 student Christopher Mong, it took time to adjust to at-home learning, but he told CBC News he "eventually" grew accustomed to a new routine.

The days would usually start with him rolling out of bed at 8:50 a.m. — much later than normal — and walking downstairs to his computer to see what lessons the teacher had posted.

Then, Mong's teacher would usually have a Google Hangouts meeting and go through all of the work that had to be done. Mong would then set about completing that work, which included getting home-schooled by his parents.

"It was like being in a regular classroom but no one knows you're there," Mong said.

"You can't really see anyone else; there's no interaction."

But it wasn't just classes that were different this year — students had much quieter graduation ceremonies. Grade 12 students were also robbed of their proms.

Instead of getting dressed up and heading off to a proper venue, Mong and his classmate Mansi Prihar just streamed their graduation ceremony on their computers.

Prihar said videos were played of teachers giving awards, and instead of calling their names, they displayed pictures of students' graduation photos on the screen.

"It [was] different," she said. "We weren't all wearing our dresses, our caps and gowns."

But the pair are looking forward to September, when they start at Earl Haig High School. They hope to make memories like the ones Deng and Opeddisano had in their beloved classrooms.

Questions swirl around the fall

Those in-person memories might be put off a little longer, though.

Questions still swirl around what will happen in September amid the COVID-19 pandemic.

School boards have been told by the province to prepare for three potential scenarios that could see a full return to class, online learning, or a mix of both.

You can read the province's full plan here.