Architect Douglas Cardinal has filed a human rights complaint about the use of the Cleveland ball club's name.

Major League Baseball 'does not give baseball teams license for such wanton discrimination,' lawyer says

Architect Douglas Cardinal has filed a human rights complaint about the use of the Cleveland baseball club's name.

Cardinal is demanding the team name, Cleveland Indians, and its Chief Wahoo logo be banned from use in Ontario.

In an application with Ontario's Superior Court of Justice and in complaints filed with Ontario's human rights tribunal, Cardinal argues the branding is racist and discriminatory, a news release said Friday.

"Mr. Cardinal, who has long fought for the rights of Indigenous Peoples, has simply had enough," the activist's lawyer Michael Swinwood said in the release. "Canadian law clearly prohibits discrimination of this nature."

Cardinal, who is of Blackfoot descent, wants a ban on the use of the branding of the team by Major League Baseball and Rogers Communications, which owns the Rogers Centre and the Toronto Blue Jays, and broadcasts Blue Jays games.

"Major League Baseball is a unique product but that does not give baseball teams license for such wanton discrimination," Swinwood said.

At the beginning of this season, Cleveland's owner Paul Dolan told a local newspaper that the Chief Wahoo logo had officially been demoted to secondary status, but would remain part of the team's identity.

"[We have] no plans to get rid of Chief Wahoo. It is part of our history and legacy," Dolan told the Cleveland Plain Dealer.

The logo was removed from the team's road cap in 2011 and the home batting helmet in 2013.

The legal push to ban the Cleveland baseball team's name and logo came ahead of Game 1 of the American League Championship Series between Cleveland and Toronto on Friday.

Pop culture critic Jesse Wente, who spoke out about the "utterly inappropriate and racist" mascot earlier this week, told CBC News on Friday he hopes his comments played some role in inspiring Cardinal to file the complaint. 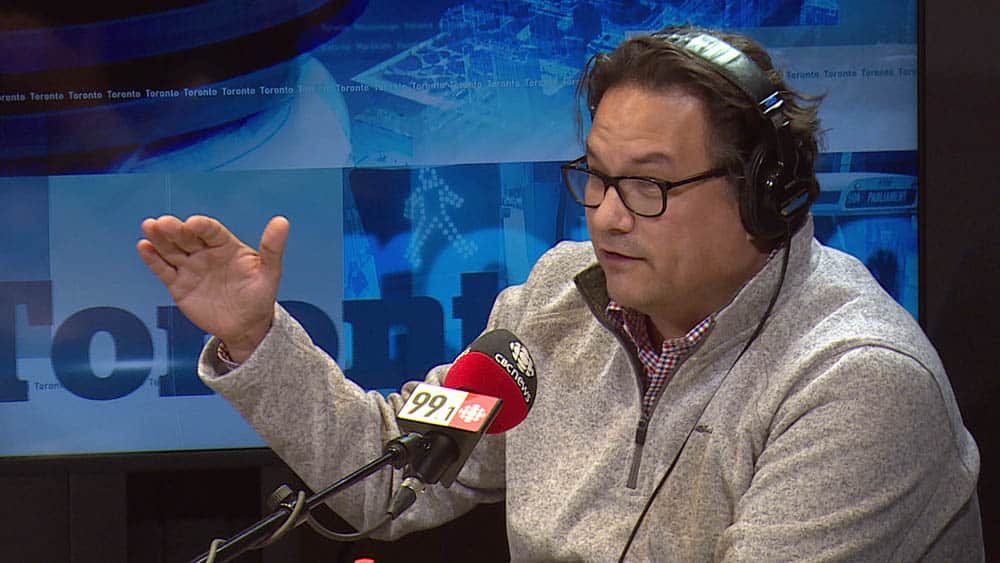 Wente: It's 'utterly inappropriate and racist'

Since speaking about the branding on Tuesday, he says he and other Indigenous people have faced mixed reaction.

"These are difficult conversations and they challenge a lot of the privilege and ideology that colonialism has placed over all the people that inhabit Turtle Island," Wente said.

"I understand some of the anger but I won't let that distract me ultimately from the goal and that is for these mascots, these nicknames, these logos to be gone forever."

A hearing is expected to be held at Ontario Superior Court on Monday.