How Lt.-Gov. David Onley wrote lyrics for a patriotic tune

Ontario Lt.-Gov. David Onley says he and his wife, Ruth, had long noticed the "absolute lack of patriotic songs in Canada." 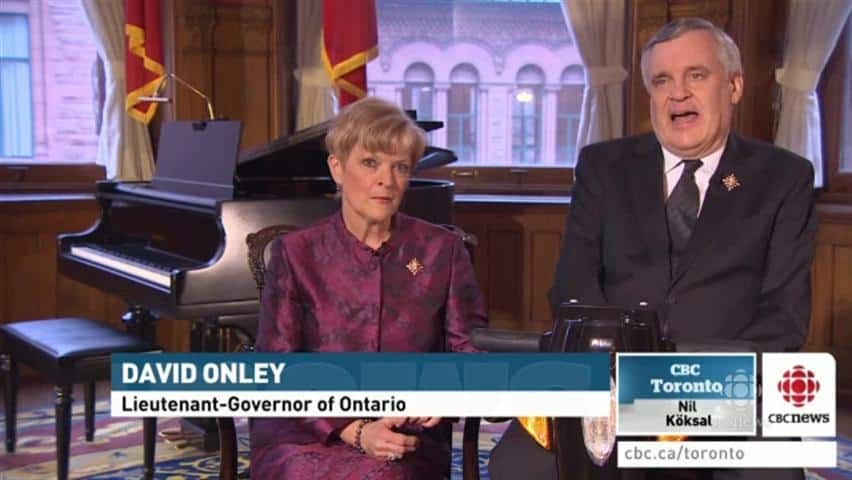 A song for Canada

Ontario Lt.-Gov. David Onley says that he and his wife, Ruth, had long noticed the "absolute lack of patriotic songs in Canada."

That was the undercurrent of a process that has since seen the Lieutenant Governor pen new lyrics to an existing piece of music, in a bid to address that same problem he and his wife had observed.

It was just over two years ago that Onley first heard the music that would inspire him to write a love song to Canada.

"In my mind, it announced itself as just a wonderfully patriotic tune," Onley told CBC News in a weekend interview.

The piece was called Highland Cathedral, a melody written for pipes and drums that is often performed in Scotland.

"Only half-jokingly, I said: ‘You know, I think I could write lyrics to this,’" Onley said, in describing the process that then led him to put pen to paper.

The composers of Highland Cathedral would eventually give Onley their blessing to add some Canadian-themed lyrics, which when performed as such will be known as We are the People of the Maple Leaf.

On the weekend, the song was recorded at CBC’s Glenn Gould Studio with Ruth Onley, an accomplished singer, singing the lyrics.

Click on the video above to see a full report from the CBC’s Shannon Martin.