Five Holocaust survivors stood together in Toronto Wednesday to call on the international community to immediately end the violence and hostilities in Syria and indict those responsible for the mass deaths in that country.

'After what we went through, we thought the world would learn something'

Five Holocaust survivors stood together in Toronto Wednesday to call on the international community to indict those responsible for the mass deaths in Syria and immediately end the violence and hostilities there.

"People who commit crimes have to know that, at the end of the day, if they're still alive, they will have to account for their activities," said Howard Chandler.

The 88-year-old Holocaust survivor was 10 in 1939 when Germany occupied Poland, the country of his birth. His family was decimated. Only he and his brother were left when the Second World War ended in 1945.

Chandler said he can relate to the suffering of the Syrian people. He's calling on the international community to do more to help.

"There's never enough being done for people who are suffering. When you're suffering, time doesn't go by very quickly."

Vera Schiff said she watches what's happening in Aleppo with tears in her eyes.

The 90-year-old was sent to a concentration camp when she was 15. She spent four years in the camp, and lost every member of her family.

"You see those pictures come out of there with all this heartbreak with those maimed and crying children. It breaks my heart because I can see the replay of those children, of our children which were lined up to be gassed in the camps and the mothers who could not save them," Schiff said. 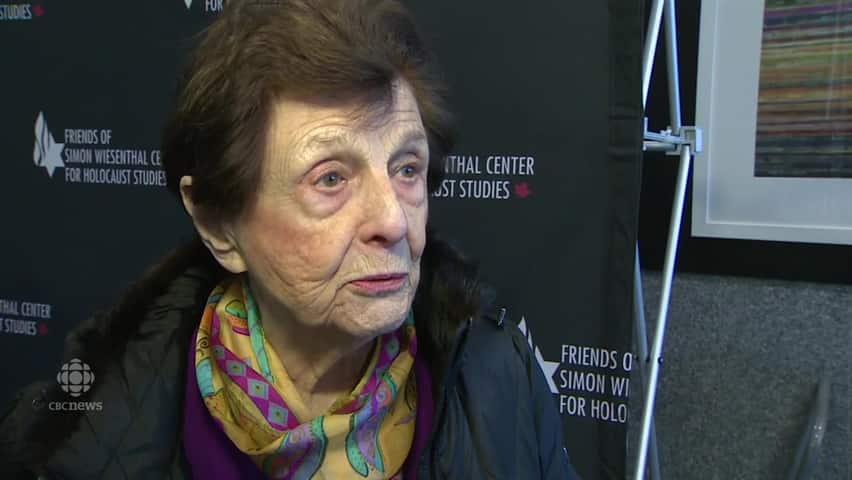 4 years ago
1:42
Five Holocaust survivors in Toronto shared their stories in the wake of the mass deaths in Syria. 1:42

She feels it is her duty to speak out to try to prevent further atrocities against innocent civilians.

"That this is still allowed to happen, that people look at horrible pictures, shrug their shoulders and go about their day — it's not permissible."

Tens of thousands of besieged residents of Aleppo and the surrounding area are again able to leave on buses. Last week, the evacuation stalled after rebel forces said pro-government militias fired on a convoy carrying evacuees and robbed them.

Syrian government forces and their supporters took control of the rebel-held areas of Aleppo this month, razing entire neighbourhoods.

About half a million people have been killed since the start of Syria's civil war five years ago. According to the United Nations High Commissioner for Refugees, 4.8 million people have fled the country, and about 74,000 refugee children are living without their fathers or both parents.

"What kind of future do these children have? Turned away from their homes, from their parents, sometimes they don't have parents," said 91-year-old Gerda Frieberg. "I know what it's like to be all alone."

Frieberg lost 127 family members during the Holocaust. She now speaks to students all over the world with the message that they must speak out to protect democracy and life.

"After what we went through, we thought the world would learn something, but I see they didn't. That's the worst that could happen."

Such atrocities must stop, said Avi Benlolo, president and CEO of the Friends of Simon Wiesenthal Centre for Holocaust Studies.

The centre invited the Holocaust survivors to stand with it to condemn the atrocities.

"If we don't speak out, and speak out forcefully, against these atrocities I'm concerned it's going to become normalized," Benlolo said.

"In 20 years from now, we're going to look back at ourselves and say, 'Where were we? Why didn't we speak out?'"