An Ontario traffic safety organization is calling on the province’s chief coroner to investigate safety issues on 400-series highways after a deadly collision Tuesday night on Highway 400, about an hour north of Toronto.

An Ontario traffic safety organization is calling on the province's chief coroner to investigate safety issues on 400-series highways after a deadly collision Tuesday night on Highway 400, about an hour north of Toronto.

Brian Patterson, president and CEO of the Ontario Safety League, said the fiery collision was a "tipping point" that triggered him to make the request for an investigation by Ontario Chief Coroner Dr. Dirk Huyer.

The hope, said Patterson, is that Huyer could put "fresh eyes" on the issue and advise the government on how to reduce accidents and deaths across the province.

Truck driver inattention in the spotlight

Ontario provincial police said Wednesday that the crash — likened by one officer to "Armageddon" — might have been caused by an inattentive transport truck driver who smashed into traffic that was queued up due to an earlier accident.

"There's really no excuse for that truck to continue down the highway at the speed," said OPP commissioner J.V.N. (Vince) Hawkes on Wednesday.

Hawkes said a coroner's inquest "could help," and would focus attention on the danger of driver inattention.

That issue was brought into the spotlight last week with an OPP announcement that charges were being laid against four truck drivers involved in four transport truck collisions over the summer, which Hawkes described as "driver inattention at its worst."

"We talked about the impacts of fatalities on the highway where transport trucks drive down the highway and impact a queue of cars or other vehicles as a result of something that's happened," Hawkes said on Wednesday. "That's the exact same scenario that we've just seen last night."

Patterson, for his part, said the inquest would not be about "fingerpointing," but about identifying the "best practices" for road users of all kinds.

Despite the efforts of the ministry and police to keep roads safe, "we're clearly missing something," he said.

"[The chief coroner] can look at everything from training and retraining of drivers. Is it a question of technology that's entered the driving space?" he asked. 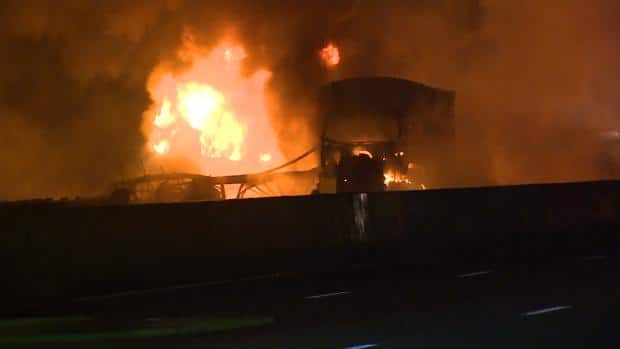 3 years ago
1:02
More than a dozen vehicles involved, several people dead or injured 1:02

"Some people have pointed out, vehicles with tinted rear windows tend to make it more difficult to see far enough ahead to spot danger," Patterson explained.

Luba Zariczny, 25, was driving to Mississauga from Barrie when she came across the pileup.

"I didn't realize how massive this thing actually was until I got up close and personal with the actual flames," she told CBC's As It Happens. "The heat was immense."

Zariczny said she stopped to see if people were okay, but also wanted to shoot some video of the scene to inform drivers what was happening on the highway.

"It looked like it was just a bunch of mushroom cloud explosions of fire going up into the sky," she said.

"When I was recording the video I even cut parts of it off because near the end I was saying there was definitely people who have passed."

On Wednesday, Ontario Trucking Association president Stephen Laskowski offered condolences to the families of people who died in the crash and defended his industry.

"No one puts a more critical eye than our industry itself," said Laskowski. "Statistically, time and time again it shows that trucks and truck drivers are the safest vehicles on the road."

Laskowski said his organization was partnering with the OPP and the Ministry of Transportation to address distracted and aggressive driving through a working group.

The amount of training truck drivers receive in Ontario increased on July 1, with the introduction of a mandatory entry-level course before would-be truckers can try for a Class A licence.

Michael John Davidson, a truck driving instructor in the Greater Toronto Area, said that education was the biggest failing in the Ontario trucking industry until the July 1 change.

"Now they're getting educated on how the truck moves, how the equipment works," he said, adding that the five-week course could be even longer to improve outcomes and could include some education on driver safety, including education about fatigue and personal health.