The Ontario government and police are investigating a long-term care facility after a hidden video camera captured an elderly woman with dementia being abused by her caregivers. 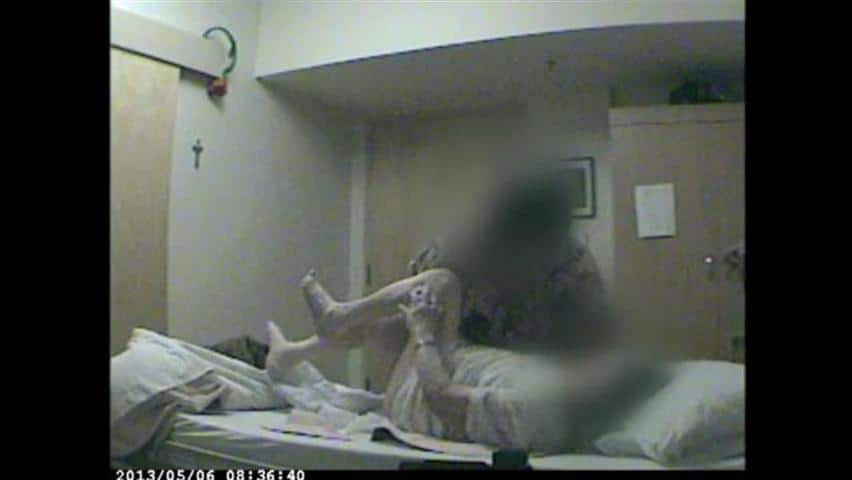 7 years ago
2:38
A Peterborough, Ont., man is looking for answers after a hidden video camera showed his 85-year-old mother being abused at her long-term care facility. 2:38

The Ontario government and police are investigating a long-term care facility after a hidden video camera captured an elderly woman with dementia being abused by her caregivers.

Camille Parent first became concerned last year when his 85-year-old mother, who lives at St. Joseph's at Fleming in Peterborough, Ont., appeared with scratches and bruises.

He complained to the facility, but after continuing to see injuries, installed a hidden video camera in her room a few weeks ago.  The images he captured over the four days were disturbing.

The video shows two staff members making out in his mother's room, another blowing his nose on her sheets, and at least one resident wandering into her room and going through her belongings.

It also captured a shocking incident in which an employee manhandles Parent's mother and thrusts a soiled cloth into her face.

"Nobody should have to see their mum go through that — it's tough to see," Parent told the CBC's Natalie Kalata. "We're talking people's lives. If this were an animal, somebody would be in jail right now."

Alan Cavell, CEO of St. Joseph's, said the staff seen in the video have all since been suspended.

"We immediately insured that the staff were not in the workplace, and in the next 24 hours met with them and suspended them," he said.

Health Minister Deb Matthews issued a statement on Sunday that said the province has a zero-tolerance policy towards abuse.

"While I can't yet comment further on this case, I can assure you that my ministry officials are investigating," the statement said.