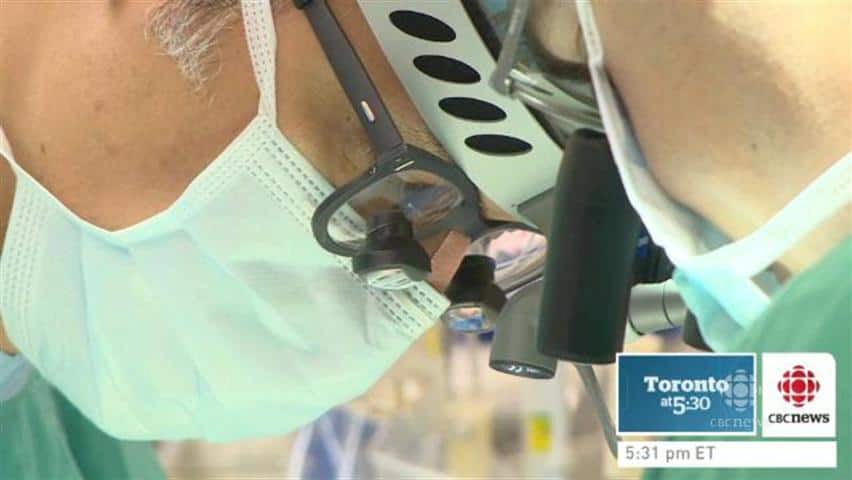 Bypass surgery is done to improve blood flow to the heart, typically after arteries have become blocked with plaque due to coronary artery disease. Surgeons remove a healthy blood vessel — often from the leg —and attach it to the blocked artery.

Sunnybrook likened it to a "road detour" around blocked arteries, with the aim of increasing blood flow to the heart.

The hospital has said the patient has given permission and referred to him by his first name, Lou.

At noon, the hospital said the grafts were complete, the heart had resumed beating successfully and Lou was off bypass. A video showed surgeons placing chest tubes to prevent blood from putting pressure on the heart during recovery. At 1 p.m., they closed his chest to complete the surgery successfully — a birthday gift for him.

Earlier, Lou was connected to a bypass, or "heart-lung," machine to keep oxygenated blood pumping through his body during the procedure, hospital tweets said.

A surgical photo showed a radial artery harvested from his left arm, one of the patient's two bypass grafts.

"Obviously we can't bring the public into the operating room, so it's nice to be able to broadcast what we do," Dr. Gideon Cohen, Sunnybrook's chief of cardiac surgery, said in a post-surgery interview with CBC News. "This is an engaging way of keeping the public informed."

On Twitter, the surgical team was asked about what they feel like during the four hours at the operating table, where they listened to music on a radio.

"You don't notice it at the time of the operation, but when you get home you feel pretty wiped," Cohen said. "So it's probably that kind of subconscious stress that gets to you at the end of the day."

Followers of #SBheart, which includes teachers and other Canadian hospitals, commended Sunnybrook for the event and showered Lou with well wishes.

But Summer McGee, a professor of public health ethics and policy at the University of New Haven in West Haven, Conn., has blogged about the ethics of tweeting live medical procedures.

"Physicians imagine becoming a social media Sanjay Gupta. But the #epicfail will be for patients: even an outstanding hospital like Sunnybrook cannot possibly prepare patients for tweeting about tragedy. And even when it’s exciting and has a happy ending, hospitals need to keep in mind that reality shows have an editing room … Twitter doesn’t."

Cohen responded that the operation and teaching during the Twitter event were the same as always.

"I think that any time you do something that's out of the ordinary in terms of operations, any type of operation, if it's going to change what you do, you shouldn't be doing it."

CABG, while potentially lifesaving and important for some patients, is needed by only a small proportion of patients who access cardiac care, according to the Canadian Cardiovascular Society. Provinces track wait times for CABG.

The hospital believes it's the first Canadian facility to live-tweet heart surgery.

Cohen was featured in this CBC story you can watch below.

With files from CBC's Steven D'Souza and Canadian Press