Ontario's embattled health minister told a special committee Wednesday she was "handcuffed" by rules that prevented her from acting sooner to stop the waste of taxpayer dollars at Ornge. 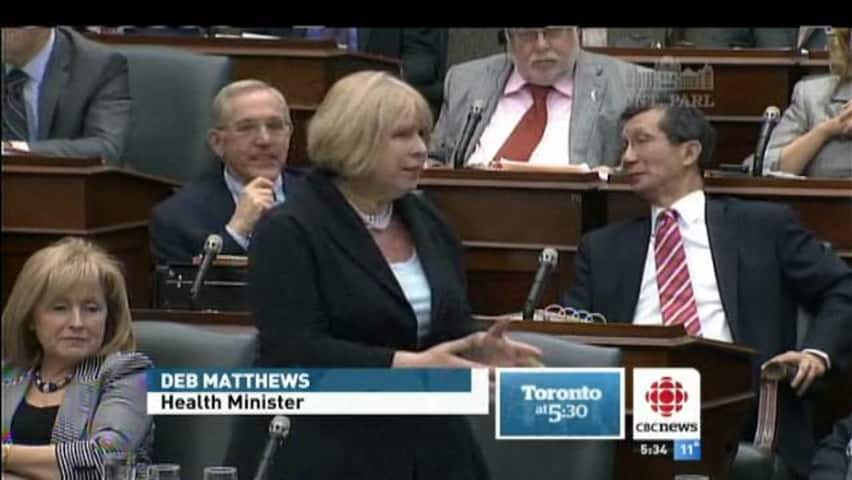 Ontario's embattled health minister told a special committee Wednesday she was "handcuffed" by rules that prevented her from acting sooner to stop the waste of taxpayer dollars at Ornge.

Deb Matthews and her deputy minister, Saad Rafi, came under heavy opposition fire during the committee into the government's handling of the troubled air ambulance service.

Both Progressive Conservatives and New Democrats questioned how the government could have taken months to act, given the clear problems discovered by the auditor general in a draft report handed to the ministry last fall.

Matthews argued Wednesday that because Ornge was a federally registered charity, she didn't have the authority to intervene, nor could she act in the face of the previous performance agreement with Ornge.

"I was really handcuffed, I could not take the kind of action that I think the public expected me to be able to take," Matthews said.

Matthews was at a loss, however, to explain how exactly she managed to get Ornge's board to resign just a few months later, and attributed the board's decision to voluntarily step aside to "significant pressure" from the media, the auditor and herself.

"I made it very, very clear that it was time for them to start co-operating with the auditor general and with the ministry staff," she said.

"I think they knew that the minute they released that compensation information the house of cards would fall, and that's exactly what happened."

Rafi also defended Matthews for failing to act immediately after the auditor general briefed ministry officials on a draft of his damning report during the election.

"It was my judgment…not knowing the outcome (of the election), that this was not something to share," Rafi told the committee.

"There's a heightened sense of confidentiality during the writ period, particularly for audit documents."

Matthews said she became aware of the issues at Ornge after the election, and acted as promptly as she could given that she never saw a draft report until after she was re-appointed as health minister.

She had previously said she had been too busy campaigning for the Oct. 6 election to act on the report when her office received it last September, and that she hadn't seen the report until December, when the auditor complained he was being stonewalled by Ornge.

His scathing report, released this month, found the government gave Ornge $700 million over five years with virtually no oversight of how the money was spent.

Despite numerous red flags, the government failed to monitor the agency as it used the money to make "questionable" business deals, the auditor said.

The opposition has been calling for Matthews' resignation for weeks, and both parties said Wednesday they were disappointed with the lack of real information to come out of the hearings.

"I've heard about five different things in the course of this hearing as to why the minister couldn't intervene and frankly, none of them hold water," Progressive Conservative Frank Klees said afterwards.

"There was a great deal of authority in the original performance agreement that allowed the Ministry of Health to oversee, to hold accountable, and as the ministry eventually admitted, they could simply stop funding if there was not a willingness to co-operate on the part of Ornge executives.

"I can tell you, they would have had their attention very quickly."

"There's big holes in the story. It's completely out of character with the way the Ministry of Health usually functions," Gelinas said.

"There were some bigger pressures at place in this issue and they're not telling us what it was."

Ornge is currently under a police probe and subject to new legislation the Liberals say will bring more oversight to the agency.