'Going after Canada where it hurts the most': GTA rail blockade supports B.C. pipeline protest

Protesters gathered at a rail yard in Vaughan, Ont., on Saturday, vowing to continue the pop-up protests in solidarity with the hereditary chiefs of the Wet'suwet'en in their opposition to a natural gas pipeline across their traditional territory in northern B.C.

‘We’re working apart but together in solidarity for the Wet'suwet'en land defenders,’ organizer says

Protesters gathered at a rail yard in Vaughan, Ont., on Saturday, vowing to continue the pop-up protests in solidarity with the hereditary chiefs of the Wet'suwet'en who oppose a natural gas pipeline to be built across their traditional territory in northern B.C.

With the blockade on Tyendinaga Mohawk territory near Belleville, Ont., in its 10th day, the Vaughan protest was one of several similar blockades across the country that have cut both passenger and freight rail services, with pressure mounting on the federal government to end them.

There were also protesters gathered in downtown Toronto and some blocking rail tracks carrying GO trains in northwest Toronto.

"We are going after Canada where it hurts the most," Vanessa Gray, an environmental and Anishinaabe activist from Aamjiwnaang First Nation in southwestern Ontario told CBC News.

"There are many groups, many networks organizing. This is across the nation, across the world. We're working apart but together in solidarity for the Wet'suwet'en land defenders."

Saturday's protest coincided with a meeting between the federal Indigenous Services minister Marc Miller and representatives of the Mohawk Nation to discuss the Belleville blockade. 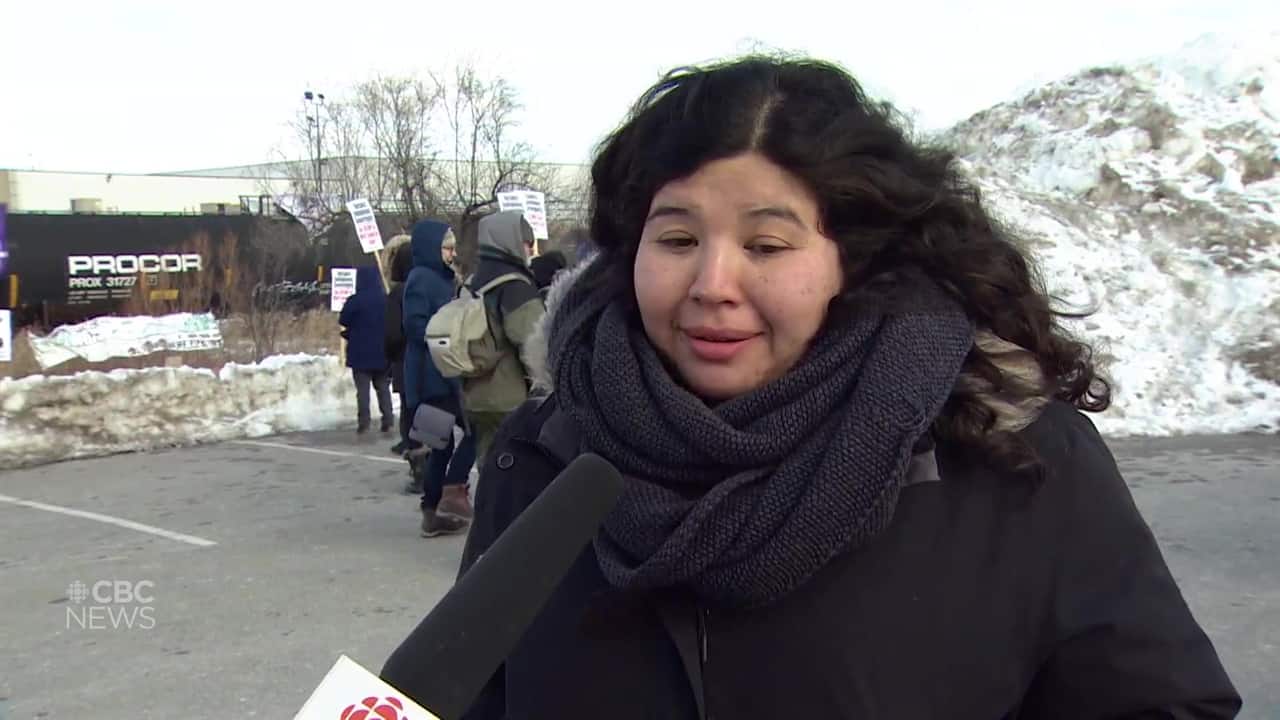 The blockades support efforts by the Wet'suwet'en hereditary chiefs in B.C., who have been protesting the Coastal GasLink pipeline scheduled to be built across their land. Armed RCMP officers have moved in on the protesters and arrested several in an attempt to clear the way for pipeline construction.

"We are just standing up and fighting back for our sovereign Indigenous right to be on our own territory without a military police raid or response.

"Canada's relationship to the oil industry is the deepest relationship that they have and we're here today to talk about the deep relationship Wet'suwet'en people have with their water. The urgency to protect that is dire right now. This is an emergency," Gray added.

The protesters said in a tweet that they were served an injunction by police on Saturday, which they burned.

'Settlers need to stop and listen'

Sarah Rotz, a professor at York University who's been supporting and helping to organize the protests, said "it's important that settlers consider and take seriously" what's going on across Canada.

She said using terms like "the rule of law" to justify the crackdown in Wet'suwet'en territory is not helping.

Rotz said she is "standing in solidarity" with Indigenous peoples and nations who are defending their land and their legal system and trying to educate settlers about their traditional governance systems and cultures and ways of being.

The York professor said it is not up to the Canadian government to decide for Indigenous peoples what kind of resource allocations and proposals should be approved on Indigenous lands.

"You can talk about reconciliation as much as you want and use really kind, nice words, but how are you going to actually change your mechanisms, your systems of governance? You can't talk about reconciliation and then impose your system of governance on Indigenous peoples and then approve or deny a corporate proposal to build a pipeline on Indigenous lands," Rotz added.

At another protest at the Bloor and Spadina intersection in downtown Toronto, a group of noisy protesters shouted, "How do you spell racist? RCMP," and "It's not their land, not then, not now. Coastal GasLink, shut the f--k down."

Natali Euale Montilla, who was at the downtown protest, said the government does not respect hereditary chiefs or colonial law.

"The Canadian government has no jurisdiction over their lands, it is the hereditary chiefs who have rule of law in those territories," Montilla told CBC News.

"What Canada is doing is totally unlawful and they're violating the right to live and the right to survive that the folks out there have, and all over what we now call Canada."

Shortly before 3 p.m. (ET) on Saturday, Anne Marie Aikins, spokesperson for Metrolinx, said there were approximately 80 people on the GO tracks north of York University GO Station on the Barrie corridor.

"We have to cancel some trains and modify others. Our priority is to ensure everyone near [the] tracks remains safe," Aikins wrote in an email to CBC News.

Metrolinx is a government transportation agency that manages and integrates road and public transport in Ontario, including GO Transit.