After two weeks of battling Walmart Canada, PJ Mazzonna got the resolution he was hoping for on Wednesday.

Consumer group says damaged and missing products on the rise

After two weeks of battling Walmart Canada, PJ Mazzonna has the resolution he's been hoping for.

CBC Toronto first published the story of Mazzonna nearly two weeks ago. His family had given him the money to buy himself a Sony Playstation virtual reality headset for Christmas but what he got was closer to a lump of coal.

When he tore open the sealed gaming box, he found a dirty T-shirt, two bottles of water, glass cleaner and a demo disc inside. Mazzonna immediately took the box full of items back to the Ajax, Ont. Walmart where the purchase was originally made. Store managers there didn't believe him. 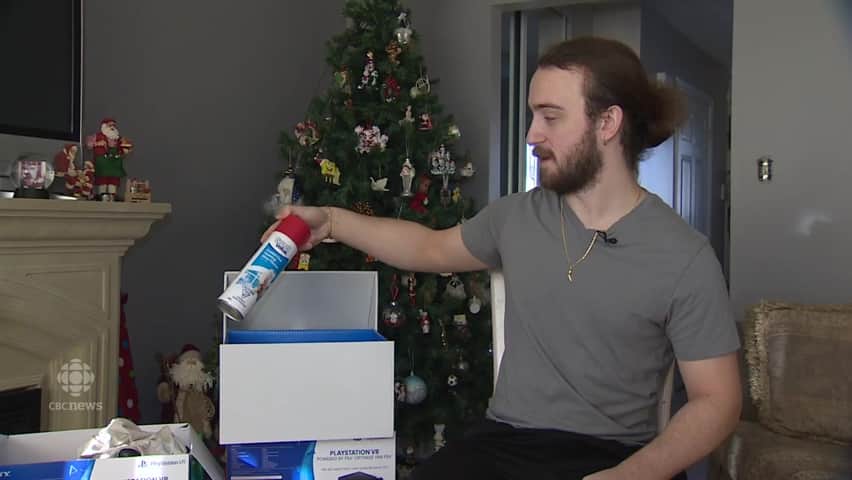 4 years ago
1:25
PJ Mazzonna from Whitby, Ont., explains that he found a dirty T-shirt, two bottles of water, glass cleaner and a demo disc inside of a sealed Sony Playstation VR headset box. 1:25

On Wednesday, Mazzonna said a Walmart manager informed him by phone that the company would refund the nearly $600 it cost to buy the headset.

"I guess they didn't believe me at the time," he said. "I don't know what ended up changing. I would have liked to have seen a bit of a faster response on this."

Mazzonna says the managers at Walmart said they are still dealing with Sony to find out how the T-shirt, bottled water and can of glass cleaner ended up in the box. That investigation is still ongoing. In an email response, a Walmart official said a situation like this "is not common" and that they review their return policies on an ongoing basis.

But Mazzonna said his family and friends are now boycotting Walmart.

"It isn't a good way to treat a customer. There's nothing Walmart offers I can't find somewhere else."

Not a unique situation

There is an increasing trend of people receiving damaged products, or as in Mazzonna's case, packaging with missing products, according to the Consumers Council of Canada.

"It is an area that we're paying some attention to because of sales over the internet specifically," said the council's executive director Ken Whitehurst.

"When you get into a dispute where goods are not delivered or damaged then you have an evidentiary problem. How do you prove it?"

Whitehurst said people have a high level of confidence in retailers and consumers should start making it common practice to open products in the store when possible.

"We also have a convenience-driven society. We don't want to take that time. In fact a lot of retailers are becoming averse to people opening packaging that is quite secure."

Whitehurst said the council is now asking people to submit their product problems so that they can document the incidents and report them to the authorities.