A decade-long housing boom that brought considerable economic benefits to the GTA belies a number of problems in the marketplace, including less affordability for more people, according to a TD Economics report released Monday. 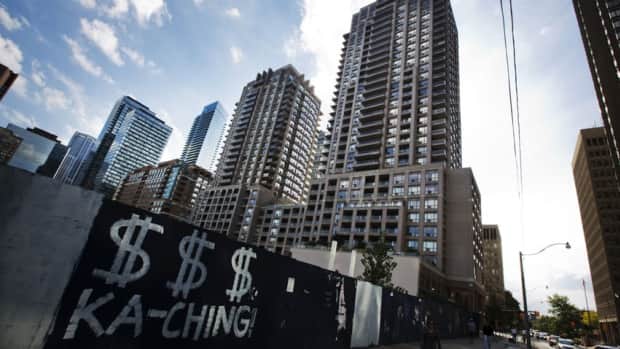 6 years agoVideo
2:47
Living in the GTA is becoming more expensive more people, and the consequences for the next generation of home buyers could be dire, a new report from TD Economics says. 2:47

A decade-long housing boom that brought considerable economic benefits to the GTA belies a number of problems in the marketplace, including less affordability for more people, according to a TD Economics report released Monday.

While about one quarter of the city’s new jobs created over the past ten years can be credited to the housing boom, certain dynamics have resulted in less affordability for a growing number of people and a drastic decrease in the diversity of housing options.

Construction of condo units has skyrocketed while other forms of housing has remained stagnant, presenting a potentially serious economic quagmire when the boom inevitably ends since condos are generally considered lower quality housing stock than, for example, semi-detached homes.

“A healthy economy should have a good degree of mobility and a good degree of housing choices,” said deputy chief economist and vice-president at TD Bank Derek Burleton in an interview with CBC’s Metro Morning on Monday.

“What we’ve seen in the past ten years is this affordability challenge has spread to the middle class and even to other, higher income levels,” says Burleton.

More young people, including those with children, are buying condos in the GTA. Their ability to eventually move into a larger property, however, is impeded by soaring costs for units other than small downtown units and a lack of reasonably-priced alternatives.

“The leap into home ownership is becoming more difficult, and those that have purchased condos as starter homes will face limited flexibility in moving up given rising housing costs,” the report reads.

The shift towards housing “typically tailored for shorter-term living,” said the report, is mainly because condos are more attractive to investors in terms of returns and risk, and because a host of government regulations prevents many developers from pursuing other options.

The trend towards condo construction is striking. According the report, “condominiums accounted for over 40% of all new homes built in the late 1990s, while more recently the share of condos under construction has jumped to 80%, half of which are being built in the downtown core."

The lack of affordable options for residents looking to buy townhouses or detached homes is pushing more people to the rental market, which is also seeing soaring costs. Nearly half of household income for earners in the bottom 40 per cent goes towards rent, the report found.

Renters taking a hit, too

The only reasonable option available for many residents is renting a condominium. Over the past ten years, nearly all of the region’s new rental supply has been supplied by condos, the report said, and about 40 per cent of condos currently being built will be used as rental units.

While a lack of low-income rental units remains a striking problem, “a greater share of the rental market is likely to be driven by medium-to-higher earning households,” the report said.

Among other recommendations that include easing regulations on landlords looking to rent property, Burleton said the GTA’s staggering lack of regional transit is exasperating the problems.

“Transit is key … Transit system helps to direct residents to where land costs might be a little bit cheaper, for example. It’s not so much about building along corridors as it is about building more transit corridors.”

If these problems aren’t addressed by governments and private developers in coming years, the consequences will be significant.

“The concern is quality of life … if we don’t start to address these needs then we’re not going to be able to sustain the quality of life and standard of living that we have,” said Burleton.